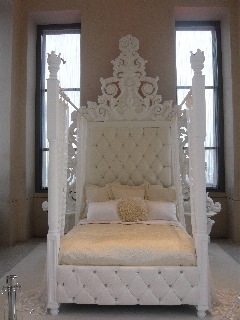 In a world of hyphenated last names and bulletproof prenups, it’s totally amazing that the traditional wedding is still a female fantasy. Do brides-to-be realize that their virginal white gowns are not-so-significant when they consummate the marriage on the third date? Do they consider that the struggle for women’s equality is completely undermined each time a teary-eyed father passes his little girl along to her next male keeper? Possibly. But despite the out-dated clichés and seemingly obsolete traditions, the dream of a quintessential white wedding still stands firm in the mind of the American Woman.

Hoping to gain some perspective on this nonsensical nuptial obsession, Scallywag ventured to 30 Rockefeller Plaza where Brides Magazine installed its Mile High Honeymoon Suite. In celebration of its 75th anniversary, the authority on all things bridal designed the ultimate post “I do!” boudoir and invited deserving newlyweds, Ryan and Kelley Pattete, to spend the evening.

30 Rock’s 67th floor viewing deck, usually echoing with camera clicks of memorized tourists, is hardly an intimate setting. But its panoramic views of the Manhattan skyline complimented Brides’s fantastical setup. Inspired by 30’s interior design icon, Dorothy Draper, the suite was a paradoxical combination of bon-vivant style and good old American marketing. What was being sold? The concept of the fantasy wedding, of course. 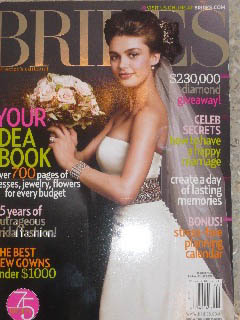 Brides Style Director and designer of the Mile High Suite, Maria McBride, told us that the boudoir was intended to be over the top. And over the top it was. Roped in by strands of shimmering crystals was a pink display of Veuve Clicquot, a strategically positioned bottle of Estée Lauder perfume and a casually placed copy of the latest edition of Brides. The focus, however, was the grandiose four-poster bed where the couple was to celebrate their union in holy matrimony. With its intricately molded headboard standing a storey high, the stark white monument was covered with Swarovski crystals, trimmed with fluttering curtains, dressed in silk-satin sheets and strewn with ruffled cream pillows. It was the pinnacle of extravagance and embodied all that is the romanticized American Wedding.

But are these frills, thrills and plastic sentiments really the heart of the fantasy wedding, the fairytale that every little girl dreams about from the moment she gains the capacity to dream? This all became quite clear when Mr. and Mrs. Pattete stepped into the suite. Hustled off their plane from Milwaukee, Wisconsin to the Top of the Rock, the wholesome couple was asked to pose, awkwardly, in front of their white wedding bed. But something happened that was so beautifully cliché, that it wasn’t. The bride and groom lookeddeep into each other’s eyes, sank down onto the bed and just smiled. The camera flashes, demanding photographers and scribbling journalists all melted away because this couple had the fantasy wedding, or rather, the fantasy marriage.

So maybe that explains the wedding extravaganza. It’s less about upholding traditions that, from a logical standpoint, mean very little in our modern society. It’s not about following some nuptial instinct, but about celebrating something that’s, for lack of a better word, absolutely beautiful. The suite was outlandishly opulent; it was big glitz, big glamour but it all fit because it celebrated a big love. And really, when you think about it, isn’t that what’s at the heart of the American Wedding Fantasy?