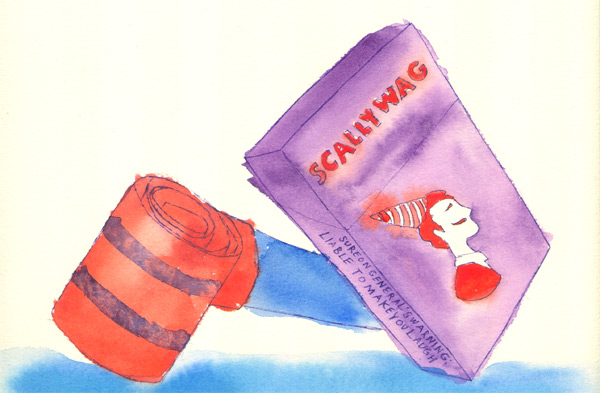 We don’t pretend to be divas, but already an hour late for this evenings new year’s eve revelry we’re playing the role that we so often call into suspect. Perhaps it is the occasion we’ve been invited to, but we know better, it’s the aura of knowing we’re on our way to a cabaret. A cabaret with our names blazing on the headlines…

It’s December 31st, nine forty two p.m, and we’re sitting on some train platform watching the passer bys in their regalia, the tin foil hats, the polka stained vests, the horn whistle blower on auto pilot and the little rat under our chair running closer to the new year and the hole in the colossal universe.

Such are the travesties of being a diva. One is compelled to reconcile with all the wonderful people (and rats) clamoring for their own very important show.

Sammy is in dire need of a cigarette. If you must know our Art Director is deferential to Camel Lights. I on the other hand am partial to Marlboro Lights. It’s been eight minutes already and in my mind I suspect Sammy is contemplating taking a drag of the horn whistle. Funny what being a diva will do to you. Funny when you imagine where you are is not where you actually are…

Such whims, not to fear we suspect the young rascal in front of us will soon exhaust on his own wind pipes. But then again we’re not sure when that’ll be…

Our train finally arrives and like the princes we think we are we take our seat. Nay, our throne! The whole elongated seat. Wind pipe boy on the other hand takes his own, directly opposite from us. Every court will always have a challenger.

As the train throttles forward we begin to wonder about all the people there with us. What they’re aspiring to, what they’re looking for, what promises they’ve made to themselves, and which friends they’ll call and embrace when the mid night hour comes. Wondering as the train hurdles forward who they wish they could be…

“I bet you’d like a cigarette,” I finally turn and say to Sammy.

“Don’t we all,” he nonchalantly reflects.

Wind pipe boy has been watching us rather intently (to be honest so have we him), he’s tempted to say something, tempted to wonder what it is that I’m scribbling, tempted to wonder who he wishes he could one day be. It’s nine fifty seven p.m and as the New Year approaches one is fleetingly overwhelmed to consider their existential plight. Such are the dictums of nights like this. Such are the dictums when you’ve been sitting around taking nips of good old Bailey’s.

As the train rushes faster from platform to dust, from dust to dream and back to platform you can begin to see the giddiness in everyone’s face. It’s what makes New York bearable, the camaraderie that nights like this can evoke amongst strangers and divas in the night.

“Happy new year,” wind pipe boy finally blurts as he makes to get off.

“Yes, you too dear,” I say my eyes resting past his hassle toy and the milieu of his blue face.

Hustling ourselves as one is emboldened to do in a city as grand and aplomb as this one we finally reach the stair case and human exit called the grand universe.

We take a long sigh, watch the million atoms thrusting, evolving, searching for whom they must become before the gentleman to my left looks at me and says

Staring at the dusty sky and the premonition of a wonderful evening I suddenly turn back and announce rather nonchalantly;

“We ought to have custom made cigarettes.”

Such are the appetites, desires of the dandy set, but then again we’re prone to suspect the roles that we have suddenly found ourselves playing…