What’s in a scandal? What is a scandal? Coked up, cracked up, or hung up? Or just the center of attention? It seems today’s celebrities have redefined the drama they once fictiously starred in on stage, revving up the ante, the drama, the antics to a place called your living room, and they’re not giving up anytime soon…

It’s a freezing Saturday morning here in NY and once again I’m dealing with the angst of my existential being. Relief? – turn on the computer and deal with other people’s existential dilemmas. After all ‘misery loves company,’ even if what I’m feeling isn’t actual misery it could come any moment.

So there I am reading about Paris Hilton, reading how she irrevocably left her camera behind in some undisclosed nightclub in a recent trip to Sydney, Australia with all her personal pictures and how this has distressed her. Amused and simultaneously baffled by the newsworthy element of the story (I did notice though the story was the second highest blogged story) I continue to peruse the net when I come across the visage of a plump irate tattooed man with what appears to be some irreconcilable jigsaw puzzle scribbled on his bald head (as opposed to inside his head) with the words “sentenced to 15 months” boldly emblazoned over him.

Oh well I think, it’s just someone random – except that it’s not someone random. Looking again I notice the name over the picture; George O’ Dowd– other wise (once) world famously known as Boy George. Sitting there in disbelief, I think about how this once androgynous karma chameleon of the 80’s had once commanded the world’s adulation and stimulation. Sit there and wonder how someone like that goes from graced cover boy to over pampered baggage look alike couch surf and turf potato. Sitting there I nervously begin to break out in laughter. How could this wonderful soul who had for the longest time collectively rivet us degenerate into an elongated coke fueled bonanza completely incoherent to himself, his victim and to all of us who once and probably still lauded him?

In other words, how could some one so gifted, so widely lauded and glorified fail not to be God? If they could be God on your stereo system, your cinema, your bedroom wall, they were indefinitely required to be God for the rest of their and your eternal lives. After all wasn’t that the implicit agreement between you, them and the boys and girls called the media that brought them live everyday into your life? 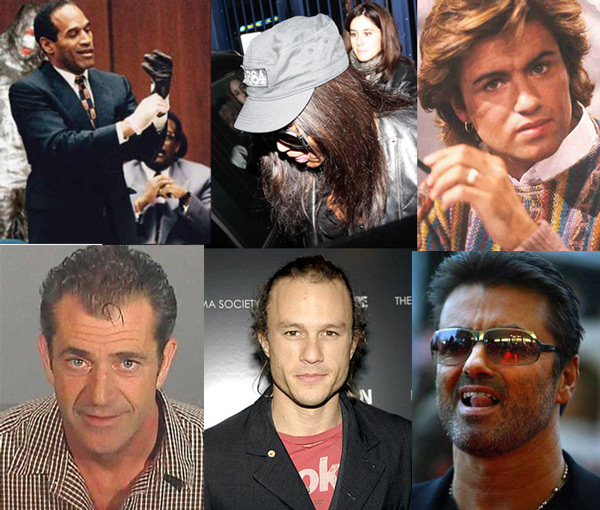 The thing with being human is that sometimes life becomes unbearable, apart from gutfuls of liquor and other distractions a firm belief in deities, super heroes, football teams, Gods, talk show hosts and the occasional celebrity will keep us in good spirits. It’s a wonderful trick we like to play on ourselves, which usually works quite well until those entrusted with immortality renege and turn up to actually be human.

To be honest, we might as well be at some Roman amphitheater, but then again, perhaps we still are. Winner takes all, loser beware…

This is the thing that disturbs us and them, that they are human, not human flesh and bones, but humans that can no longer sustain the cool controlled gaze they so often offer us on the catwalk, the studio, the salon, the cinema, and the deepest recesses of our imagination.

What compelled them to break the rules, compelled them to misbehave, to try their luck, to actually believe in a myth that they were infallible? For a myth to conclusively work, what’s most important is that we the believers unwaveringly believe it, but the moment the designated mortal believes that he is actually immortal, and actually above the law and the matter floating in the universe is to then invite treason to a Roman garrison.

Emperors have always enforced and dictated moral and legal standards, that is for the likes of you and me, but as history and tv can attest the rules were never really meant to apply to them. In the same vernacular, driving down a LA freeway, with your knickers off, high on amphetamines, and at a hundred thousand million miles would seem likely to be a no no, but when your being chased on and off the stage shining lights can have the effect of disenchanting the protagonist, and at best inspiring and vilifying them to take that one extra step that you and I would think once, twice, a thousand times against…well except when we don’t.

One might cry foul that we hold our celebrities to much higher standards, but then again they are the ones walking around with unending frequent flyer miles, until that is …when they aren’t.

When OJ Simpson went out with a bunch of friends with a few loaded guns to reclaim ‘missing sports regalia’ what compelled him to go there? What compelled George O’Dowd to handcuff and viciously berate the Norwegian male escort Auden Carlsen?

Perhaps it had nothing to do with his sense of empowerment or entitlement. After all a ninety thousand dollar cheque for a twenty nine minute speaking engagement and other frivolities only designated to emperors and their elk could have inspired contempt and malice for the rest of us, or maybe just not. Or perhaps with the allure of white powder and other crackling substances (ask Amy Winehouse) the self contempt that this brilliant individual normally feels towards herself is now directed at us, her fans.

This of course is not to suggest only celebrities commit crimes, and that the rest of society abides by all the rules, that could hardly be far from the truth. Yet one has to wonder if the make up world that a designated individual such as celebrities live in has the effect of absolving them over the rigors of having to be a human being, or rather the rigors of having to feel misery and existential angst. Of course we all know that’s a pipe dream.

The image of Michael Jackson turning up to court in pajamas to face accusations of pedophilia (again) has always struck me as amazing. Could it be that this man is so brilliant that he doesn’t have to bother with the conventions that you and I are drawn to consider everyday, or is he just plain mad, or just too cunning? Maybe this is the ‘turn on’ for us, or maybe the automatic self destruct auto pilot that so many brilliant people often find themselves descending to. One way or another it’s a hire wire act, and you and I aren’t just about to leave the living room set yet.

How is it that Paris Hilton could go from suburban Valley doll heiress to international rock star after her 2003 video episode which exposes her to performing salacious acts reserved to most people’s bedrooms and inner fantasy world? Had it happened to you and me, surely it could have spelt the end of our social standing. Hit and scream at your employees (Naomi Campbell), sniff a pound of coke (super model Kate Moss) in front of the cameras (now that’s confidence, bravado and complete disregard for the tool that feeds her, or just sheer aplomb), drink, drive, smash and do an insanity stint (Britney Spears) watch your career resurrect.

Steal and faint on a jumbo jet (Wynona Ryder), get high and call the police to report a false burglary to only be found with thirteen illicit baggies and ‘go to jail’ (George O’Dowd). It’s almost arbitrary, how is it that some celebrities can skirt scandal and come off better for it, while others are forced to wear orange jump suits and our collective recriminations? Is it superior public relations skills, superior patronage, or the vanity that has finally allowed the amphitheatre to express their collective disgust and the their thumbs down? 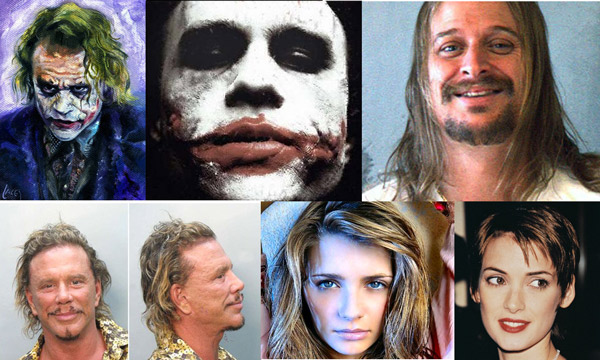 Perhaps one could argue had it not been George O’Dowd on the stand his sentence would of have been suspended, but then again, had it not been George O’Dowd, the privileges that this man had over the years acclimated himself to may have never come. After all a gladiator has to be prepared to live and die by the sword, and not play trivial when the game no longer suits them. Of course it’s this very sense of entitlement that has many of our gladiators checking back and forth to ‘treatment spas’ because they know they can afford to, of course that is when they suddenly can’t (does this all remind you of some banking fracas with high end chief executives now crying that they suddenly believe in socialized losses?). One can only break a bottle of wine so many times before eventually mangling their pajamas…

One way or another life will go on, and rest assured we’ll all be reading about another celebrity acting up, and us watching their life in the balance, but prey who will be watching next time we wake up and suddenly feel the pangs of existential angst?

Whatever the outcome I do hope they come up with Paris’ lost camera, because on some level her camera contains all the lost images of our society, and anyway I bet she takes nice pictures, until that is, she doesn’t… 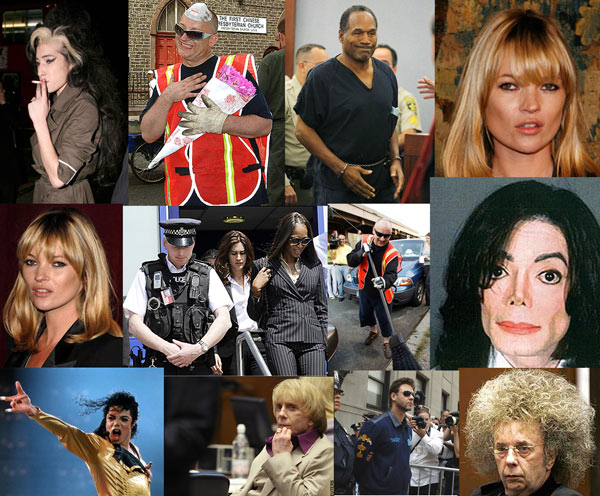