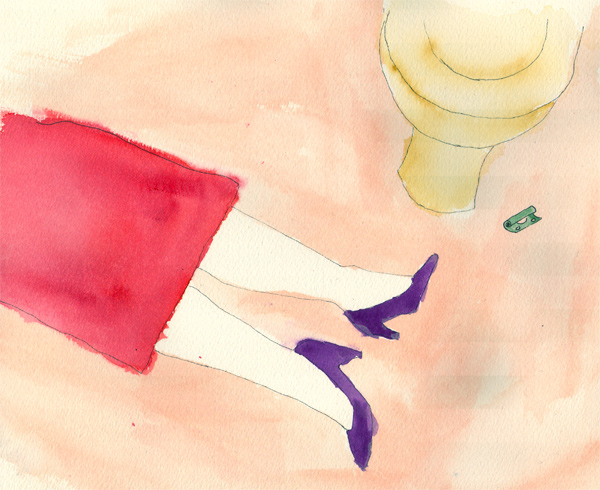 With financial institutions in sudden peril and the framework of free market capitalism in jeopardy, I resolved to watch the end of the first worlds’ misery alongside $30 cocktails and two patricians at the Gramercy Hotel’s Rose Bar. The service was protracted, the ambience was alarming, and the forthcoming recession was looming

Upon my cumbersome exit, I reduced that happiness is sated pride.

In periods of economic anguish, the word on the minds of privileged youth is not recession… it’s recess! Gallivanting around like wild school children has been the solution to the myriad of life’s problems for the liberal minded affluent class since the infancy of class itself. And why not? Isn’t the purpose of affluence the ability to attain a lack of moral absolutes and to indulge in the finer sides of life? If the trust-funders aren’t enjoying exceptional Italian wines then who is? AND Would our continued perception of grandeur even exist without them?

I joined two acquaintances, William and Leopold (sons of wealthy Louisiana oilmen), at the Rose Bar in the Gramercy Hotel in the vicinity of one month ago, the night after the largest market tumble since Black Tuesday (10/29/29).

Topics discussed: 1. Where are our hors d’oeuvres? 2. Indentured servitude and internships can solve the rising economic and immigration conundrums. 3. $25 Stella Artois’ are quite reasonable in this day and age.

And so we drank and dabbled with Bailey’s and small colored cocktails. Leopold described lucidity as fleeting moments between sips as William made frequent trips to the bathroom. I reclined and smoked cigarettes inside one of the only establishments still allowing such trifles to take place as these gallants argued, skirmished, and gratified themselves as though they were on the Left Bank with George Plimpton. Older men brandishing young trophies encircled our dialogue, and though they were satisfied, none of us could help but notice the deepening panic that was becoming harder and harder for them to suppress.

With conversation abound, I made my way to the bathroom with the intent of acquiescing to necessity. Inside of the marble covered chamber I found further debauchery.

In the stall to my left I could hear what seemed to be an injured lemur and an aggressive bear. I looked down and saw a pair of Brioni slacks around a man’s ankles with two Prada slippers straddling. The toilet reservoir began to rumble and crackle as I wallowed in my indulgence.

I had my fill, made my way over to the sink, and left them to their hobbies. But as I exited the bathroom, I heard a bellowing crash to my rear and I felt water gushing under my souls.

Suddenly I realized, this is the cause of and solution to our economic woes: Old men fucking our youth in a public latrine until the toilet breaks, then blaming it on structural instability as well as the non-English speaking bathroom attendant. It’s that simple.

Thirty minutes later I found myself back in the bathroom partaking in my party accoutrement, this time drying my own hands in the company of a plumber named John Doe.