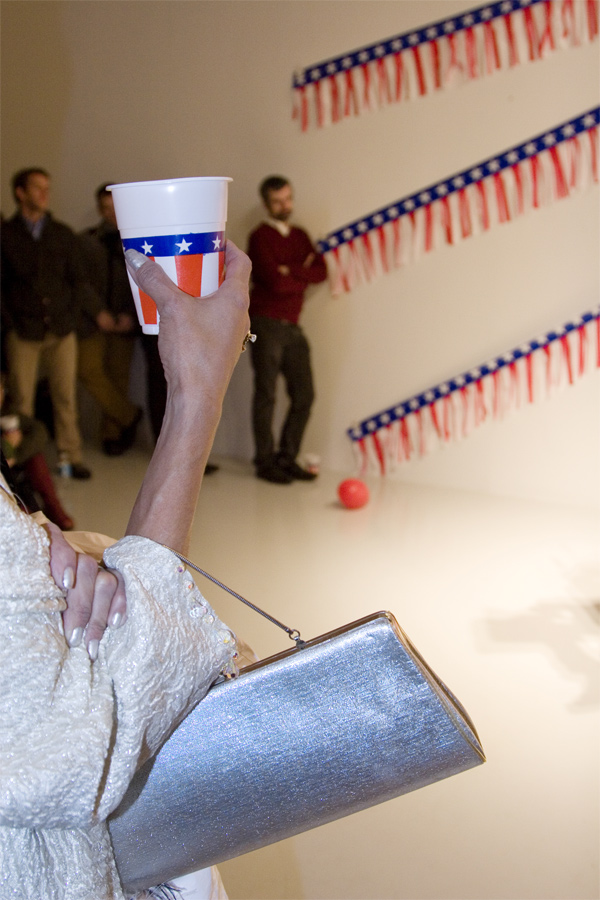 With the election finally over, and the new ’emperor’ ordained, we are poignantly reminded that what has always been at stake is the strata of power. Power to interpret a bill of rights, power to veto, to indoctrinate, to motivate, to elucidate, to fabricate.

In the current paradigm of revolving celebrities, breast implants, aghast financial markets, executive pardons, civil limitations, approximations, media switch kits, ‘Joe the plumber’ fix kits, one has to wonder where the power has gone, how it’s been re-negotiated and shot down along with ‘King Kong.’

At the heart of this matter is the efficacy of the ‘system,’ it’s integrity, its elasticity and ultimately its access for ‘social mobility.’ After all a car will never go anywhere if you don’t give it the necessary fuel, road blocks, culture shocks and oil spikes not withstanding.

That said, ‘Scallywag and Vagabond’ (SCV) sat down with the affable, charming and quixotic Miss Cintra Wilson (social and cultural arbiter at large) on the heels of her latest book release- “Caligula for Presidency: Better American living through Tyranny,” to discuss with her media switch kits, neurotic movie stars, combustible presidencies and how this all reminds her of a time called ‘ancient Rome.’

SCV; In your book “Caligula for presidency; Better living through American tyranny” who was the actual Caligula and why did you choose him as a historical reference to describe the current political climate?

Cintra; Gaius Caligula was the Emperor of Rome. He is most famous for appointing a horse to the Senate and for the fact that Bob Guccione Jr. made an X-rated film about him. He was widely considered to be dangerously insane; he thought he was a God, he had sex with his sisters and he enjoyed murdering people. He’s one of the best historical examples of absolute power corrupting absolutely. I feel that our presidency, today, has granted itself an abysmally dangerous amount of unchecked executive authority. Caligula is only one example: the inevitable end result of too much executive power is tyranny.

Cintra; Well, even for a hereditary monarch, Caligula took things pretty far — he put a brothel in the Senate and made the senators’ wives work in it. He declared war on the ocean and declared a Mission Accomplished. When you consider young Hollywood starlets with scads of money running around on fentanyl with no panties on, you can see how close we are to having a spoiled, idiotic, weak, ruling-class dirtbag President behaving in a similar fashion. The Bush Administration was a very serious lesson for America about how precious and delicate our constitution is, how important it is to protect, and how ingenious it was for being designed specifically to prevent shit like the Bush administration. It was written specifically with Rome in mind — the authors of our constitution were looking at Roman emperors like Caligula and Nero and thinking, ‘How can we make sure this doesn’t happen here?’

SCV;Why do you think society as a collective has become so enamored with the activities of these particular ‘gladiators?’ What role does the media play in this?

Cintra;The media has always been fascinated by hubris, and watching people who suffer from excessive pride get their asses handed to them — since the dawn of media.

SCV;What’s the allure of celebrity and why must one become one if they have are to have a chance in modern day America?

Cintra;This was the thesis of my first book: “A Massive Swelling: Celebrity Re-Examined as a Grotesque Crippling Disease.”

I think in America, especially, celebrity has been an incredibly effective brainwashing tool — it convinces people that they are less successful or less perfect than they should be, and this sells a lot of tooth bleach and hair dye and sports cars and diet pills. Many people, in the back of their minds, will always feel that they are essentially failures unless they become famous. Even parents are prone to loving their successful children more than their other children. There is something in our human nature that enjoys comparing ourselves to an impossible ideal, and punishing ourselves for not living up to this ideal. Before Hollywood, the Catholics were running this game pretty well.

SCV;In your book you claim that ‘man’s aim is to dominate, subordinate, and to consume,…..even each other.’ Can you be so kind to give examples how we do this?

SCV;If one were to aspire to become a modern day tyrant, despot or misbehaving celebrity what pointers would you offer them? Is there a particular book, or tv show you would have them watch?

Cintra; Machiavelli is always a good place to start, but if you really want to oppress with the big dogs, I think you need to watch the “House of Cards” miniseries with Ian Richardson as the UK Prime Minister.

SCV: Finally, what inspired you to write this book?

Cintra: I wanted to create a work of edu-tainment. Above all, I wanted to write down and record for people what some of the questions are that we need, as Americans, to ask the incoming administration. There are a lot of terrible things that the Bush Administration did behind the scenes — they created a lot of strange and unconstitutional executive orders that have the full force and effect of law. They concocted the theory of the unitary executive, which basically declares that the president is exempt from any checks and balances or subject to prosecution under normal laws.

What we have in America right now isn’t a presidency so much as a dictatorship. Unless Obama actually renounces some of the obscene power he will inherit from the Bush administration, he’ll have all the tools at his disposal to be a dictator too.

Maybe we can trust Barak Obama — maybe not. But what history has proven, again and again, is that you certainly can’t trust every jackass who ends up in the highest seat of authority.

Our founding fathers told us to watch our backs and gave us the best legal tool in the world for doing so — it’s our right as Americans, and we must reclaim and protect it.