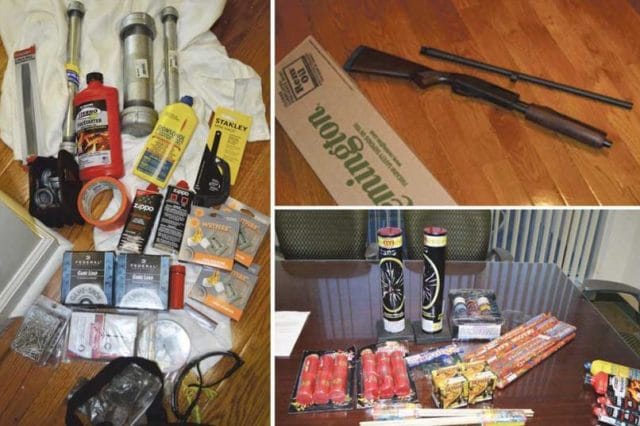 Nichole Cevario a Maryland High school honor’s student is no longer on the dean’s list after it was revealed the 18 year old pupil was planning a mass shooting and bombing at her school.

The outing comes after school officials at Catocin High received a frantic phone call from the girl’s father on Thursday saying he had just come across his daughter’s diary where the teen documented an imminent attack in the coming weeks.

Police said the diary’s entries documenting plans for a mass shooting going all the way back to December 16 of last year.

A searching of the Thurmont, family home led to police uncovering a shotgun with ammunition, fireworks and an arsenal of other materials for making bombs reported CBS Baltimore.

Police say Cevario had been planning the attack for months. A tentative date of April 5th had been earmarked by the student.

Police said the diary contained extremely detailed and contained intelligence Cevario had gathered about activities at the school, including emergency procedures and information about the school resource officer.

“There is no doubt in our minds that we averted a disaster up there,” said Charles Jenkins of the Frederick County Sheriff’s Office during a Monday afternoon press conference. “It was also clear in her diary that she planned to die during this event”.

School officials, like many in the community, have been left in disbelief.

“We had no indication whatsoever that there were any issues with this student,” said Michael Doerrer of Frederick County Public Schools.

The official said Cevario was not on their radar.

“You would never think that it would be her to do something like this. I knew something was up with her but I would have never imagined that it was this bad,” one student said.

Reiterated the Frederick County sheriff: “You could read the frustration, the emotional issues. Talking about how she could conduct this shooting, the fact that she may be the first female active school shooter in the country”.

Adding, “It shocks the conscience to see that someone of that age could be thinking like this.”

According to ABC News it is not uncommon for potential attackers to mention the Columbine School mass shooting. In the last 17 years, 79 attacks have been prevented and more than half of the would-be attackers mentioned Columbine as they made their plans.

Cevario was taken to the hospital for evaluation and remains hospitalized, with investigators believing the girl posed a threat to herself.

Police stress that no weapons ever made it on school grounds. The teen faces a number of charges, including possession of explosive and incendiary material with an intent to create a destructive device.

Back to normal at Catoctin HS after Sheriff’s Office arrests 18 yo Nichole Cerario who they say was planning a violent attack. #wbal pic.twitter.com/X4SF1cH1TO