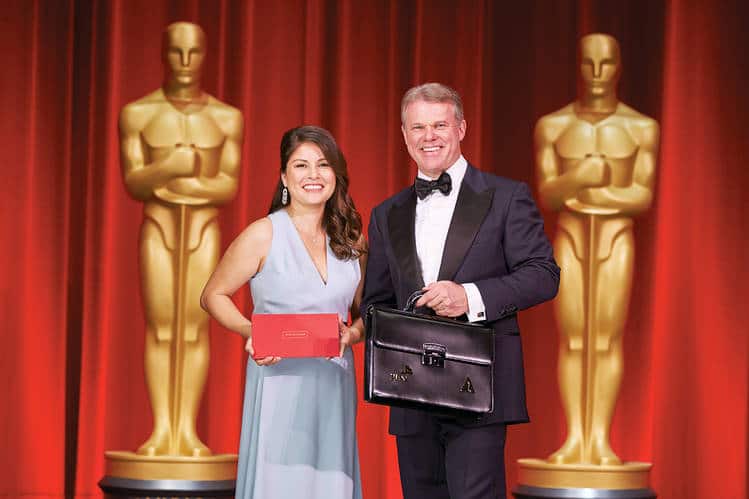 Martha Ruiz and Brian Cullinan of Price Waterhouse Coopers might just be responsible for the Oscars mistake 2017 as investigations are underway.

All eyes are squarely on accountancy firm Price Waterhouse Coopers, as it has since been revealed that PwC partners Martha Ruiz and Brian Cullinan were instrumental in the ‘stuff-up’ that saw ‘La La Land’ declared the winner for best film at the Oscars 89th award when moments later it was declared that ‘Moonlighting’ had won instead.

With Ruiz standing on one side of the stage and Cullinan on the other side, it was the job of the auditors to hand off the correct envelope announcing the winner to Hollywood stalwart presenters, Warren Beatty and Faye Dunaway.

The hand off was made to Beatty who then passed the envelope to Dunaway (perhaps he sensed something was off …?) who then told the audience that La La Land was the winner, prompting almost two minutes of thank you speeches from the cast and crew. Instead of bringing the night to an end, it was the beginning of a chaotic, messy, unprecedented Oscars moment.

As the dizzy crew of La La Land accepted the honors, a representative of the Academy Awards’ accountants of more than 80 years, PwC, realized there had been a mistake and Barry Jenkins’ Moonlight was the actual winner.

Host Jimmy Kimmel came forward to inform the La La Land cast that Moonlight had won, showing the right envelope as proof and an ecstatic Jenkins leapt to the stage with stars of the two movies in obvious shock.

PwC last night issued a groveling apology. ‘We sincerely apologize to Moonlight, La La Land, Warren Beatty, Faye Dunaway, and Oscar viewers for the error that was made during the award announcement for Best Picture,’

‘The presenters had mistakenly been given the wrong category envelope … We are currently investigating how this could have happened, and deeply regret that this occurred.’

Cullinan and Ruiz, the PwC partners, were the only people who knew who the Oscar winners were before the envelopes were opened. They were carrying briefcases that held the sealed envelopes with the winners’ names, and were stationed backstage during the ceremony, handing each envelope to the presenters.

According to PwC, Mr Cullinan and Ms Ruiz memorized all the winners (or did they?) and if a mistake was made in an announcement, PwC had protocols in place for correcting the error immediately.

Monday morning reports tell of Ruiz and Cullinan admitting before the show that they had no plan B if the winners were read out wrong.

Just days before the pair told the Huffington Post that they were unsure of the exact procedure in the event that the wrong actor or film was named as a winner in any given category since such a mistake had never been made in the awards’ 88-year history.

Explained Cullinan to huffpo: ‘We would make sure that the correct person was known very quickly. Whether that entails stopping the show, us walking onstage, us signalling to the stage manager — that’s really a game-time decision, if something like that were to happen. Again, it’s so unlikely.’

To date, the exact circumstances of how the mishap unfolded are not yet clear and no particular individual has been blamed. Yet.

Cullinan, in his fourth year in the role, and Ruiz, in her third year, are responsible for manually counting the 7,000 votes made by members of the Academy of Motion Picture Arts and Sciences and are the only two people to know the full list of winners before the ceremony notes the dailymail.

They pair were earlier seen arriving on the red carpet ahead of the ceremony at the Dolby Theatre, showcasing their matching briefcases filled with the 24 winners cards, which they each give out at either side of the stage to the presenters of the awards.

As the ensuing madness of who actually won took place in front of the world, Cullinan could be seen on stage clutching a red envelope with both Cullinan and Ruiz both forced to intervene on stage amidst the confusion and chaos.

But now it gets ugly and tricky. Will PWC get the gig next year?

In a recent interview with Financial News, Cullinan revealed that the job of organizing the awards does not come up for tender.

‘As long as our relationship is good and strong and we do a good job, which we always do, the academy has been pleased I think with how we’ve been involved,’

‘It’s such a long term relationship that we know intricately how everything works, the timing of it, the process that we use, and they have absolute trust in us and what we do.

‘It’s just been a good, long standing relationship. We hope we’re doing this 83 years from now as well.’

Which is to wonder will there be an 84th year around the corner…?

Here’s Martha Ruiz and Brian Cullinan, partners who hand out the Oscar cards. One messed up Best Picture. Look into their eyes: Who was it?? pic.twitter.com/Z6sPSHnhFj

looking for someone to blame? keep the names Brian Cullinan and Martha Ruiz in sight. This will come down to them. #Oscars #BestPicture