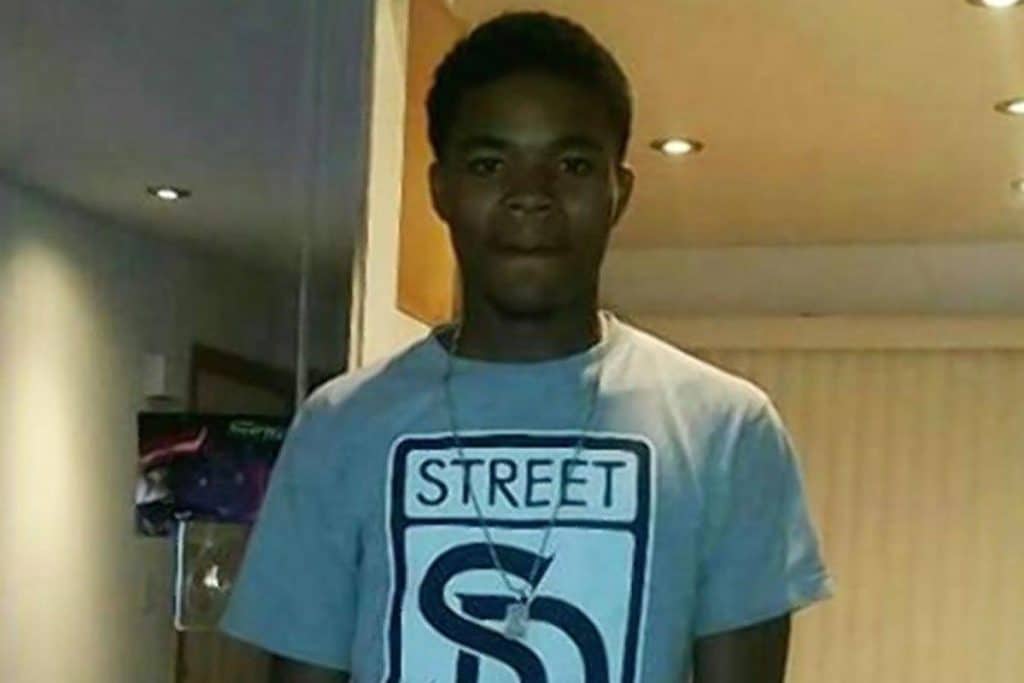 Was Kajuan Raye a black Chicago youth murdered at the hands of Chicago police? Shot in the back while fleeing police but with cops yet to find a gun the teen is alleged to have had.

The shooting death of Kajuan Raye, a 19 year old black teen at the hands of Chicago police has raised disturbing questions after police have yet to locate a gun the youth is alleged to have been threatening police with Wednesday evening before his shooting death.

According to a sergeant, Raye pointed a weapon at the police officer before shooting dead the South Side youth.

The shooting notes the chicagotribune came after the unidentified cop responded to reports of a battery with the youth running from the scene when given chase.

At the time, Kajuan Raye was waiting to take the bus home when he was approached by the officer, who claimed the youth matched the description of a suspect in a ‘battery in progress’.

From there, Raye fled, with Chicago police alleging the youth allegedly turned and pointed a weapon ‘on two separate occasions during the pursuit’.

In turn, the sergeant fired a series of gunshots, fatally striking the fleeing youth.

According to the Cook County Medical Examiner’s Office, Kajuan Raye died from a gunshot to the back.

Despite the police officer’s claims that the teen pointed a gun, Chicago Police Superintendent Eddie Johnson conceded on Thursday that no weapon had been recovered from the scene notes the nydailynews.

Told Johnson: ‘We were not able to locate a weapon as of yet,’

Adding: ‘We have some missing information in our timeline,’

‘There are still many unanswered questions.’’

Press reporting that the autopsy report confirms that Chicago Police shot 19 year old #KajuanRaye in the back pic.twitter.com/LbqaRLoWlj

Of note, Cook County court records indicate Kajuan Raye pleading guilty to a theft charge in September 2015, with the youth at the time given one year of court supervision. In 2016, records show Raye violated supervision and an arrest warrant was issued in his name July 25.

Further confounding matters is the youth’s Facebook page is dotted with gang imagery. Nevertheless relatives told WLS that their loved one didn’t own a gun.

Asked why he ran, Raye’s cousin Ahkeya White said Kajuan ran ‘because he was afraid’.

Told the family in a statement: ‘At this point the family and friends of Kajuan Raye are heart-broken that their son is dead at the hands of a police officer who does not value the sanctity of life of black males.’

Adding: ‘As a city we continue to struggle with police who are afraid of and have deep-seeded prejudices against black youth.’

The family remains adamant that the death of Kajuan Raye is tantamount to murder.

Reflected community activist, Ja’Mal Green who decried what he claims is a lack of police transparency, ‘I’m sickened.’

Adding: ‘It does not take a day to find a gun. They (cops) messed up,’

‘Right now the city has to pay for what it has done.’

The sergeant who shot Raye has been put on administrative duty for 30 days while Chicago’s Independent Police Review Authority investigates.

Chicago police have not said if the sergeant who shot Raye was wearing a body camera as the public is forced to wonder once again whether prejudice and perception played a role in yet another black man’s death as opposed to actual life or death legitimate danger?

The family’s attorney Jay Payne has since told he is planning to file a civil rights lawsuit in U.S. District Court on Monday against the CPD and the officer who shot Raye.

Kajuan raye mother: we just identified our son through a tv screen.” She is crying. @WBEZ pic.twitter.com/VLGroRBSr5