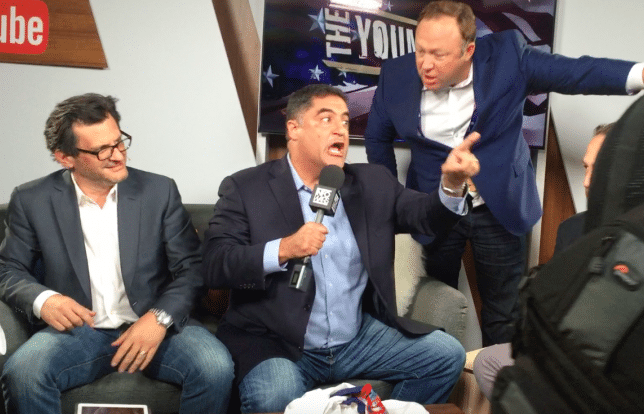 It might be one thing for political rivals to go after each other but then all together different (and up close) sight when media factions of the opposing ideological wing go after each other which is what exactly happened Thursday night when Alex Jones of Infowars crashed Cenk Uygur’s Young Turk’s telecast at the Republican National Convention.

With noted far right ideologue Alex Jones suddenly appearing (uninvited) on Cenk’s stage and taunting the progressive host, it wasn’t too long before Cenk Ugyur lost his nerve and began demanding Jones get off the stage after throwing a t shirt at the host with a picture of Bill Clinton with the word ‘rape’ on it. Clearly, Jones knows how to bait well.

From one end of the spectrum, you had Jones taunting Cenk, calling him and co host, Ana Kaspariana, Jihad sympathizers with Uygur in turn retorting that Donald Trump advisor, Roger Stone who had also come along for the ride (so much for impartial journalism) was the ‘biggest liar in media’ along with being a ‘piece of crap.’

Hardly dissuaded and presumably loving it (Jones stood over the Young Turks host with a smirk that wouldn’t leave) while Stone responded ‘Bullshxt, bullshxt’ at Uygur.

Then again what did anyone expect as ever more scrutiny is being given by media agents (both non main stream, which is telling of the following non traditional media agents are able to attain these days) as they jostle and cater to a wider swath of audience outside of traditional media, insisting they are anti-establishment.

‘I wanna have a rant-off with you,’ taunts Alex Jones as he urges Stone to crash the set, as well.

Not to be missed is the brimming smirk on Jones’ face who knows he’s hit payola as a flabbergasted Uygur has to be restrained.

While it technically might not have been Alex Jones’ show, it might as well have been, with a report on the incident on the infowars website since leading to an avalanche of comments, many congratulating the stunt with others lamenting the once impartial media presenter/conspiracy theorist for morphing into his own troll (with a wink) that he had once promised to expose.

What in God’s name is going on with this convention https://t.co/3PkPfXhtr3