Reinhold Hanning a former Nazi guard had been sentenced to five years for his role in the killings at Auschwitz, more than 70 years after the end of World War 2.

The 94 year old man’s guilty conviction comes for what the court deemed to be Reinhold Hanning’s part as an accessory to murder in more than 170 000 cases where he is alleged to have helped ‘underwrite the Nazi murder machine’.

The sentencing comes despite prosecutors conceding there was no evidence of Reinhold Hanning having ever actually directly killed anyone.

Despite being found guilty, questions remain as to whether Reinhold Hanning, who prior to his retirement had run a dairy shop, will in the end serve any time behind bars.

The sentence comes after more than 1.1 million people are said to have been murdered by the Nazis at the infamous death camp, most of the victims Jews.

To date, of the 6500 personnel who served at Auschwitz, only 29 have them been prosecuted in Germany.

Eva Mozes Kor: ‘Oskar Groening should not be prosecuted.’ 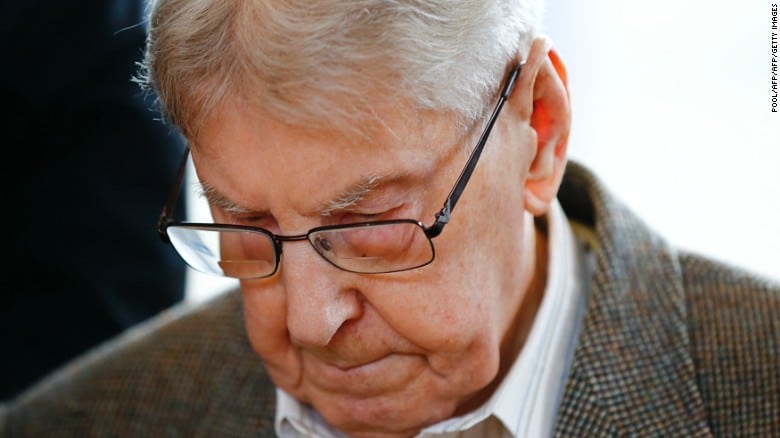 The latest conviction in a courtroom in the western German city of Detmold, follows that of Oskar Groening a 95 year old man also known as the Bookkeeper of Auschwitz who was jailed for four years in 2015 for his role in the murder of 300 000 persons.

To date the man has not served a day in jail as a result of his ongoing appeal.

As in Reinhold Hanning’s case, the trial of Groening led to furious debate as to whether Groening was actually complicit with the activities of the Nazi or whether as a soldier he had no choice but to only follow orders or face peril.

Reinhold Hanning’s sentencing comes after having volunteered for the SS at age 18 and serving at the concentration work camp from January 1942 to June 1944.

During trial, the man’s lawyers told how Hanning joined the Hitler Youth with his class in 1935 at age 13, before volunteering at 18 for the Waffen SS in 1940 at the urging of his stepmother.

From there, he described fighting in several battles in World War Two before being hit by grenade splinters in his head and leg during close combat in Kiev in 1941.

As he was recovering from his wounds he asked to be sent back but his commander decided he was no longer fit for front-line duty, instead choosing to send him to Auschwitz, without him knowing what it was.

During trial, the former Nazi claimed he hadn’t been involved in the killings that took place at the concentration camp, where prisoners were either killed immediately, or forced to work as slave laborers with many dying as the result of the ravages of disease, including typhoid and starvation.

During trial,Reinhold Hanning was confronted by 95 year old Auschwitz survivor Leon Schwarzbaum who told while addressing the court: ‘The older I get, the more I think about what happened in Auschwitz.

‘Why don’t you come clean and tell the truth for once about what you and your comrades did in Auschwitz?’

Mr Schwarzbaum, whose parents were murdered in the camp, recounted the starvation and constant fear of dying that plagued prisoners after they were taken to Auschwitz.

Those who sought to escape were ripped to death by dogs and their bodies left as a warning to others, he said, adding that regular executions and the endless stream of people sent to the gas chambers sowed terror.

He said: ‘I was constantly afraid of dying from hunger or being selected (for the gas chamber).

Ahead of the case, he told remembering how the ‘chimneys were spewing fire… and the smell of burning human flesh was so unbelievable that one could hardly bear it’.

That said, the former prisoner said he did not want Hanning to go to prison and was happy he apologized, but stressed he wanted the former Nazi guard to provide more details about his time in Auschwitz for the sake of educating younger generations.

‘The historical truth is important. Speak here about what you and your comrades did!’, he said.

During the trial, Hanning’s lawyers had argued that he had never personally killed or beaten anyone.

He told the court in April: ‘I want to say that it disturbs me deeply that I was part of such a criminal organization.

‘I am ashamed that I saw injustice and never did anything about it and I apologise for my actions. I am very, very sorry.’

German prosecutors were required, until recently, to provide evidence that defendants were directly involved in the killings.

This COWARD is no gentleman! He’s a mass murderer who hid his SS and NAZI affiliation for over 70 years!

I don’t care if he didn’t directly beat and kill people, he spent 70 years covering for those who did. He deserves every bad thing that happens to him. Should’ve come forward a long time ago.

As the descendent of Holocaust survivors I question the justice in this process. The first Nazi’s caught were quickly executed or hung. Later lower level Nazi’s were sentenced to increasingly shorter sentences, as our focus shifted from seeking justice to confronting the cold war threats of the Soviet Union. Now that the cold war is over, we no longer need them and are now prosecuting even these low level functionaries. I am not saying they are not guilty of being accomplices to the mass murder, but what social good is there in putting these geriatric soldiers on trial?

After 70 years is this justice, punishment or vindictiveness?

Did this guy volunteer for the job? Likely he did not. How many soldiers who refuse their orders in wartime and, particularly in Nazi Germany, live to tell anyone about it?

The SS was a volunteer organization. While he probably did not select his assignment, he was a Nazi and part of criminal and ruthless organization. “Just following orders” doesn’t cut it.

Let’s now extend this to those who police the concentration camp called Palestine including all those murdered there. All the generals of the Israeli IDF for a start?