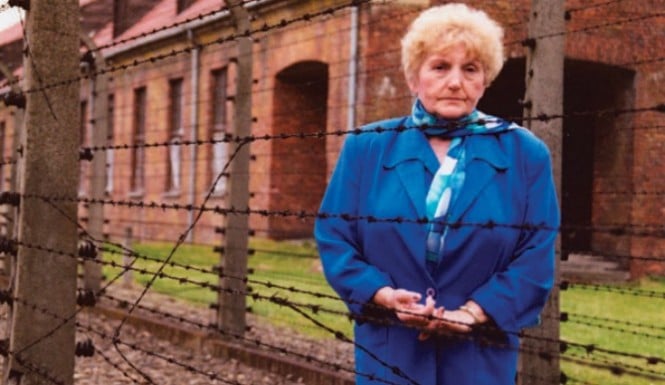 Eva Mozes Kor a co plaintiff in the case against the Auschwitz bookkeeper of death has told that Oskar Groening should not be prosecuted for his participation in the holocaust deaths of 300 000 Jews at the concentration camp.

The call to exonerate the 93 year old former guard who was mandated to collect personal belongings of those alighting arriving trains as a then 23 year old  comes after the 81 year old woman, a survivor of the death camps hugged the man last week.

Despite Kor’s calls to not have Groening prosecutors, who admits moral culpability but not legal culpability Kor has angered fellow plaintiffs who have now questioned Kor’s judgement and have since set about criticizing the woman for today’s stance.

Since Eva Kor’s comments during a television appearance last night, her co plaintiffs have released a statement questioning why her involvement in the case against Groening.

Told the statement: ‘Our clients would not comment here – who better than a survivor of Auschwitz knows that everyone needs to find their own way to overcome their suffering – if Mrs Kor did not repeatedly stage her ‘forgiveness’ publicly.

‘The subject of this criminal procedure is NOT that Mr Groening has done anything personally to Mrs Kor or any of the other co-plaintiffs.

‘Whether it is Mrs Kor’s place to forgive Mr Groening’s participation in the murder of her relatives is up to everyone to decide for themselves.

‘But if Mrs Kor says “these prosecutions must stop” then she should not have become a co-plaintiff.’

The statement added: ‘We cannot forgive Mr Groening his participation in the murder of our relatives and another 299,000 people – especially since he feels free from any legal guilt.

‘We want justice and we welcome the resolution that this trial brings.’

I am sharing with you my face to face meeting with Oskar Groening the former Nazi guard. Two old people reaching out pic.twitter.com/XlooNvPpQ1

What makes Kor’s plea to forgive and not hold Groening legally culpable for the atrocities at the death camp is the fact that the woman who had been cosigned with her twin sister as part of Joseph Mengele’s medical ‘experiments’ is the fact that she has unofficially adopted the grandson of SS commander Rudolph Hoess.

Hoess would be remembered as one of the chief Nazi architects who oversaw the murder of more than one million individuals at Auschwitz.

Told Kor on her facebook page last week after forgiving Kroening who at the time fainted after being hugged by the woman: ‘My forgiveness does not absolve the perpetrator from taking responsibility for his actions. Neither does it diminish my need to know what happened there.’

Asked why she hugged him she said at the time: ‘I wanted to thank him for having some human decency in accepting responsibility for what he has done.

‘I was always interested in meeting him face to face because I believe that there is a human interaction that I cannot predict and no one else can predict.’

She added: ‘I don’t forget what they have done to me. But I am not a poor person – I am a victorious woman who has been able to rise above the pain and forgive the Nazis.’

Since Kroening has come to trial the man’s case has ignited furious debate as to whether he ought to bear any legal consequence for atrocities at the  death camp after Germany in recent years introduced a law holding that being present at a death camp was tantamount to complicity alone.

At present it is not necessarily understood why Germany introduced such a law almost 80 years after the end of the death camps and to what extent lobbying and the push to placate Jewish interest groups may have played a part?

Despite the moral dilemmas of those presiding the death camps, many commentators on the web have unanimously defended Oskar Groening, arguing the man had no choice and to have refused to do his job would have led to the same fate as those he was forced to document. Which begs the existential question what would have happened if in fact an entire group of army personnel did in fact resist their orders and why they hadn’t if they held ethical reservations over assigned tasks?