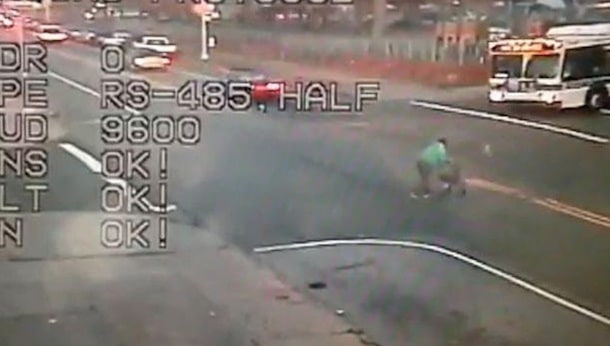 Paul Roper, a 48 year old veteran MTA city bus driver who plowed through 70 year old Brooklyn woman, Carol Bell, 6.15 am Tuesday morning has been arrested after literally slicing the woman in half as she attempted to cross the street.

The arrest of the hit and run bus driver who continued driving on after fatally striking the woman came after Bell attempted to cross the intersection of Fulton and Sackman street in Ocean Hill. At the time, the invalid pensioner was crossing with the aid of a wheeled walker when she was hit head on.

MTA bus driver Paul Roper: ‘I thought she was garbage.’

At the time the woman, nicknamed ‘Freckles’ who lived at a nearby shelter was making her way to a detox methadone program.

Told witness, Ramon Garcia via the nydailynews: ‘She was cut in half … definitely in half,’

‘I tried to help her but she was too bloody. There was a lot of blood.’

A surveillance video at the scene shows a B15 bus which at the time was out of service stopping for a moment at the scene, but then continuing on down the street. Of question is whether Rope was even aware of Bell being hit, and if so, why he chose instead to carry on?

Reiterated the stunned witness: ‘He just kept on going,’

‘He never realized what had happened. It’s a big machine. I guess you don’t feel something like that.’

Hours later, Roper, a 15-year veteran of the Metropolitan Transportation Agency working out of the East New York Depot, was located and was arrested on leaving the scene of the accident, failure to yield and failure to exercise due care, officials said.

Roper’s bus, No. 3838, turned up in service about three hours later at Kings Highway and E. Third St. in Midwood — about seven miles from the slow-moving hit and run after the bus driver returned the bus back to the depot shortly after the woman’s death.

At the time of the incident, police had sought to track the driver of the bus, only to find the bus was being driven by another driver after eventually notifying the MTA reports the nytimes.

Soon after the bus was towed to the East New York bus depot, where according to MTA spokesperson, Amanda Kwan, an investigation took place.

‘This is a terrible tragedy, and our hearts and prayers go out to all family and friends,‘ Transit Workers Union Local 100 President John Samuelsen said.

Adding: ‘We will closely follow the investigation, which is in a very early stage.’

Offered the victim’s friend, Jajaida Meyers via CBS: ‘The bus didn’t even know where she was in the street, he thought she was trash like some garbage or something.’

‘It’s so sad the way she had to die this way…but they got it on camera, so I hope these people release that because this is a tragedy,’ told friend Jennifer Gonzales.

The B15 bus transports passengers from JFK Airport in Queens into Brownsville and then to Woodhull Hospital in Williamsburg.

There are no bus routes at the corner where Bell was killed, but an out-of-service bus can take any route it wants on its way back to the depot, officials said.

Notes a report via streetsblog: Though the driver left the scene and may have violated the Right of Way Law, NYPD told DNAinfo police “did not immediately suspect criminality.” The Right of Way Law, also known as Section 19-190, makes it a misdemeanor for a driver to injure or kill someone who is walking or biking with the right of way. NYPD has applied the law only a few dozen times since it took effect in 2014.