The summonsing of welfare and diversity officer at Goldsmiths University, Bahar Mustafa in London to appear in court has raised questions as to what constitutes free speech and whether despite what many of us consider deplorable, hateful, racist or bigoted speech choose to endure it for the sake of free speech for all.

At stake is a tweet which the activist tweeted, #KillAllWhiteMen which led to the woman’s summons courtesy of Metropolitan Police to answer two charges, both of which come under the Malicious Communications Act 1988. The first is for sending a ‘letter/communication/article conveying a threatening message’; the second for ‘sending by public communication network an offensive/ indecent/ obscene/ menacing message/ matter’.

The inciting messages came in response to Mustafa’s antipathy of those who she regards as retaining privilege in society by virtue of their race, dominion, class and social status along with gender, hence the easy target of ‘kill all white men.’

Implicit behind Mustafa’s offensive tweet,#KillAllWhiteMen (confession, I am what Mustafa might consider a privileged white male, oh well…) is the notion that minorities (which Mustafa proudly reminds us she is) can not be racist or sexist because, in order to be racist or sexist, you must be in a position of power or privilege.

Reflected one well thought out post: It’s a silly loophole that allows a person to be a bigot without fear of backlash. 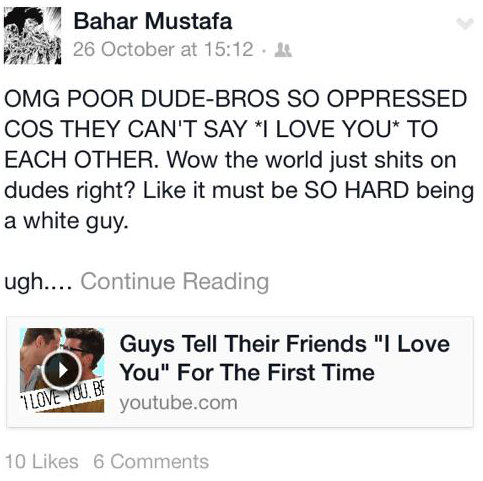 A Facebook post in May, promoting an event about diversity and discrimination in higher education, came with the following caveat:

For good measure, Mustafa went on to post the following diatribe: ‘OMG… Kill them all. What’s wrong with white people?’ and “#killallwhitemen’ on Facebook.

Naturally that didn’t go down too well, with calls for Bahar Mustafa’s head, which in turn led to Mustafa responding that she was on the receiving end of a witch hunt.

Responded our vixen in kind: ‘There have been charges laid against me that I am racist and sexist towards white men,’

But somewhere in all of this there was a fallacy in argument. Shall we deconstruct it?

Posits everyjoe: Granted the hashtag was in poor taste for someone in her position, and most certainly meets the criteria for racism and sexism – the real criteria, not the imagined criteria that people like to implement in order to escape accountability. I dislike Mustafa, and what she wrote. However, no direct threat was made to a specific person. The moment speech and expression, on the internet or anywhere else, become prosecutable offenses, a dangerous precedent is set regardless of the country you live in. I don’t have to like what Mustafa said or what she stands for in order to defend her.