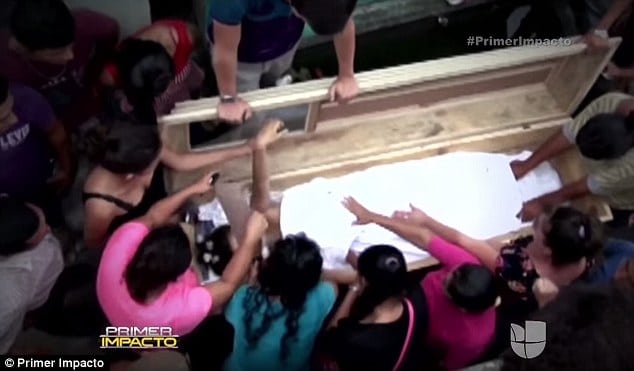 Remarkably video footage (see below) captured the moment grieving family members broke through the concrete tomb from where the 3 month pregnant girl had been heard ‘banging and screaming’.

Relatives who removed the girl’s corpse found that the glass viewing window on her coffin had been smashed and the tips of her fingers were bruised.

Despite efforts to revive her medics found no signs of life and she was later returned to the cemetery and reburied in the same mausoleum.

According to a report via the dailymail, the girl fell unconscious after waking up in the night to use the outside toilet at her home in La Entrada, western Honduras.

It’s speculated the teen may have collapsed in a panic attack after hearing sudden gunfire.

When teen started foaming at the mouth her religious parents called the local priest believing she had become possessed by an evil spirit.

Relatives told how the priest tried to exorcise her, but she later became lifeless and was rushed to hospital, where three hours later doctors declared her dead.

How or why the teen was declared dead to date has yet to necessarily be explained.

In turn the girl was buried in the wedding dress she had recently used to get married.

A day after her funeral, her husband Rudy Gonzales was visiting her grave at the La Entrada General Cemetery when he heard banging and muffled screams from inside the concrete tomb and raised the alarm.

The footage shows desperate family members breaking through the concrete block tomb with a sledgehammer, before bringing out and opening up the girl’s coffin in a bid to revive her.

Offered the groom via local media: ‘I was heartbroken because my sweetheart had been taken so suddenly from me. I wanted to be near to her.

‘As I put my hand on her grave I could hear noises inside. I heard banging, then I heard her voice. She was screaming for help.

‘It had already been a day since we buried her. I couldn’t believe it. I was ecstatic, full of hope.’

He said: ‘I convinced myself that the screams were coming from somewhere else. I never imagined that there was someone alive in there.

‘That afternoon the girl’s husband came to me begging me to get her out because she was alive.

‘He was hysterical. The family were soon here and started breaking through the tomb, shouting her name.’

Upon being removed from her burial plot, Neysi Perez was taken to the nearest hospital in San Pedro Sula, where she was carried in still inside her coffin.

Although medics tried to revive her, all the tests they carried out showed that she was clinically dead.

Recalled Doctor Claudia Lopez: ‘The whole family rushed in, almost breaking the door down, carrying the girl in her casket.

‘I told them to take her out and put her on the bed. Everybody was claiming she was alive so I went through all the necessary procedures.

‘We evaluated and tried everything but the girl was dead. They put her back in the coffin and took her away again, back to the cemetery.’

Doctors believe Neysi Pere may have suffered a severe panic attack which could have temporarily stopped her heart activity.

Another hypothesis is that the teenager had a cataplexy attack, an abrupt temporary loss of voluntary muscle function typically triggered by a strong emotional stimulus such as stress or fear, during which the victim maintains full conscious awareness.

She may then have died from lack of oxygen after waking up inside the closed coffin.

Her cousin, Carolina Perez, said: ‘Once we had taken her out of the tomb I put my hand on her body. She was still warm, and I felt a faint heart beat.

‘She had scratches on her forehead and bruises on her fingers. It looked like she had tried desperately to get out of the casket and hurt herself.’

Ms Perez’s mother Maria Gutierrez believes her daughter was buried alive and blames medics for being too quick to sign her death certificate.

Told the mother: ‘The doctors declared her dead but everybody else around me kept telling me she wasn’t. She didn’t look like she had died.

‘Even after a day in the tomb the colour of her body was normal, her corpse didn’t smell, she just looked like she was in a deep sleep.

‘There was no rigamortis, her body was still flexible, it was impossible that she had been dead for so many hours.

‘We were all so happy. After being declared dead for such a long time, everybody was saying that she had come back to life.

‘We were all so happy. I thought I was going to get my daughter back.’ 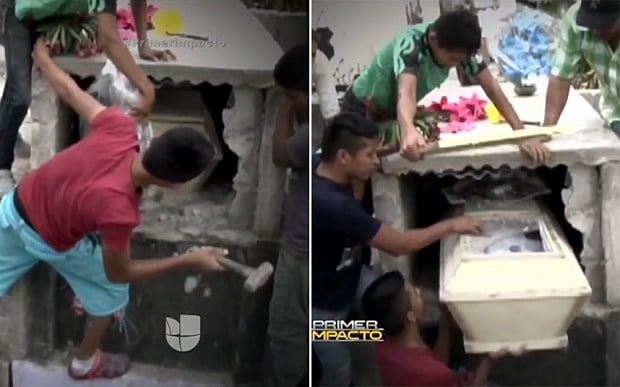 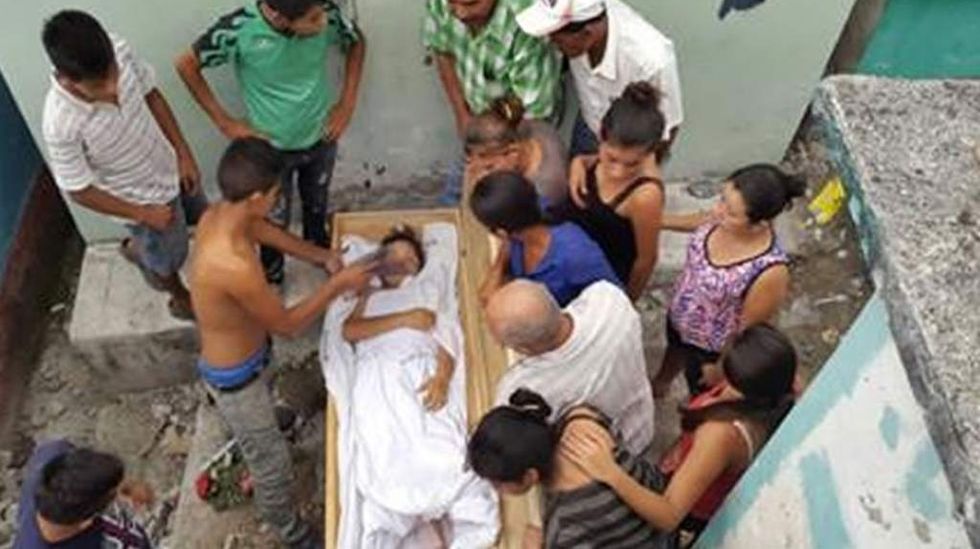