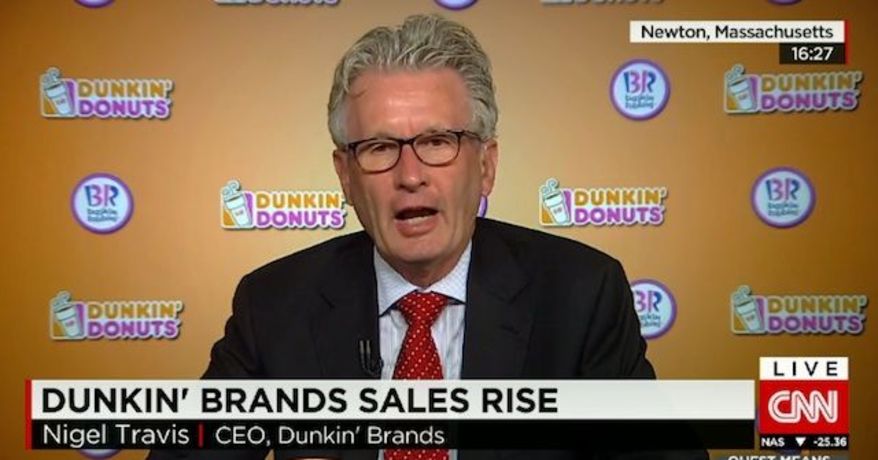 The executive who made more than $10 million in 2014 and lives in a multimillion mansion instead prefers a more ‘modest’ raise of minimum wages to only $10, arguing that the more than 71% to $15 will do more harm than good.

The CEO’s comments come after New York state’s wage board recommended that fast-food workers in New York City should make at least $15 per hour by the end of 2018.

At present minimum wages in NYC are at $8.75 an hour, hardly the lofty wage one can expect to make a ‘reasonable’ living off. Then again define reasonable and while we’re at it how does one decide what the fair market value for such laborers ought to be? The state or what the market place will bear?

Told Travis via CNN who now believes the increased wage will put halt on future hiring of employees: ‘It’s going to affect small businesses and franchises.’

Reiterated the CEO via Restaurant News: ‘Most concerning to us was that the fast-food industry was singled out for this increase,’

Adding: ‘The regulation also targeted franchise businesses and it does not acknowledge that, just because our franchisees share a common brand, they themselves are small business people to whom every increase in business expenses can have an impact.’

Travis, who has a mansion in Massachusetts and a flat in Florida, said that he supports the idea of a ‘living wage’ that should be tied to an employee’s cost of living.

He said that he believes $12 an hour sounds more reasonable, believing this to be the living wage for a worker with a family.

Nevertheless MIT’s Living Wage Calculator shows that the living wage for a single adult in New York state is $12.75. For a family with two working parents and two kids, each parent would have to make $18.30 an hour.

‘A debate needs to take place about how to tackle income inequality,’Travis said, adding that the decision to raise wages is premature.

The CEO’s comments led to commentators on social media taking the executive to task.

Contemplated a variety of commentators:

‘@DunkinDonuts $15/hr for employees is outrageous but $10 mil/year for CEO Nigel Travis is okay? This is more of the #1percent vs #99percent,’ wrote @JDavis0403 on Twitter.

‘@DunkinDonuts ceo Nigel Travis says $15 an hour is outrageous….while he is making $4889 an hour. #truestory,’ @GlenWein wrote on Twitter.

‘Dear @DunkinDonuts CEO Nigel Travis I won’t be stopping by for coffee anymore,I’ll head to @Starbucks for every cup,’ Twitter user @stefsstuff wrote.

And then there was these comments on the web as well that made me wonder as well, see what you think?

It’s impossible to side with CEOs of billion dollar corporations telling us they can’t afford to hire more people if min wage goes up to $15 an hour.  What they really mean is they won’t get as big a bonus if they don’t keep delivering record profits to their shareholders.  I believe the average American is tired enough of hearing this nonsense to start demanding a decent living wage.

The ones who will suffer the most if min wage goes to $15 an hour is the Mom and Pop shops but if they can hold on for 6 months to a year it will be worth it.  As more people have money to spend for things other than rent and food the more they will have to spend on other things,

I am a small business owner currently the sole worker and I need customers who have more spending money/  When the largest part of the wealth is held by a small part of the population it puts a strangle hold on our economy.  More money in the economy = more business.

Just how much should a job requiring minimum education, minimum skills, and minimum ambition be worth? Anyone who isn’t happy in a job paying minimum wage needs to do something with their life to pull themselves out of that future and into a better one. The opportunities are endless for those who want to improve their lives, but it will not be easy, fast, or fun. Every single person on the planet makes choices that directly affect their life, such as staying in school, not getting pregnant or being promiscuous, planning ahead, working their butt off at one, two, or three jobs, saving money from every paycheck (even if it’s only a couple of dollars), refuse to give in to instant-gratification, live beneath their means, etc.

seriously. Can americans decide if they want socialism, capitalism, or communism and just settle on it?

Every job in the world is not meant to provide a wage that you can support a family of 8, 12 pets, an elderly parent, and sick relative out of work.

Low income jobs are meant to be either secondary incomes, or temporary incomes for certain kinds of people (students). You aren’t meant to make a career out of being a burger slinger at McDonald’s. No matter how bad you want to do that, they haven’t designed the job like that and it isn’t the company’s responsibility to pay you more just because you don’t want to/can’t do anything else with your life.

If someone wants to make $24 million, then they should aspire higher and work for more rather than be satisfied just flipping burgers or dipping dough into vats of fat. See, there are these things called choice, common sense and intelligence.

If you think working a non educated required job isn’t worth a liveable wage scale, try doing that job for a day.