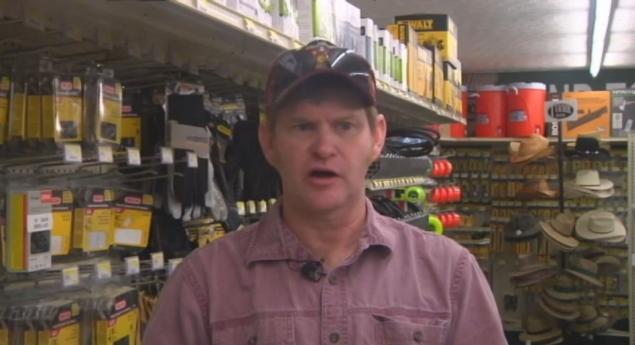 Tennessee hardware store owner, Jeff Amyx, 44,  has caused disconcert after placing a sing outside his Amyx Hardware and Roofing Supplies store forbidding the patronage of homosexuals.

Adding: ‘let the homosexual people know that there are Christian people that are willing to take a stand.’

The man’s declaration comes after the passing of last week’s Supreme Court ruling that legalized same-sex marriage across the United States.

Offered the man via  WATE-TV: ‘A lot of people have called me and congratulated me (and) people calling and threatening me telling me I would regret this,’ 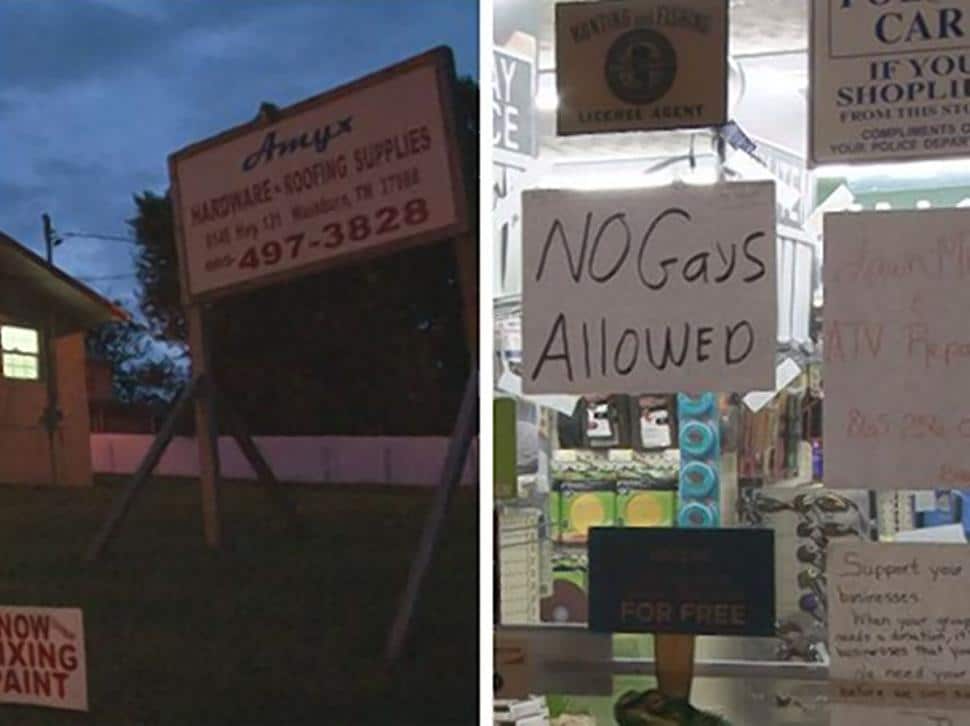 Come Tuesday, Jeff Amyx replaced the message with a new sign meant to be ‘less offensive’.

Read the new sign: ‘We reserve the right to refuse service to anyone who would violate our rights of freedom of speech and freedom of religion.’

Amyx, a self-described ‘blunt’ man, claims he has nothing against gay people and has offered to read them passages from the Bible at his store.

Reiterated the store owner: ‘Until they tell me it is illegal to have my freedom of speech and to my freedom of religion, the sign will stay,‘ 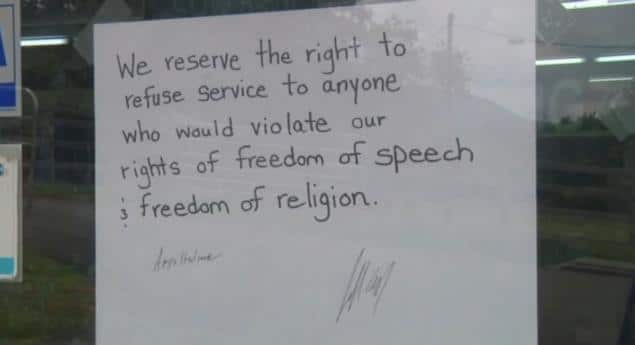 At present it is not necessarily understood if authorities will seek to have the man take down his sign, or whether laws exist to force the man’s hand.

Which raises the question, whilst an individual may always exercise the company they choose to keep, ought a business be forbidden from distinctly discriminating against an individual’s sexuality, skin color and religion, even if that business happens to be a pedantic hardware store owner masquerading his prejudice as freedom of choice?

Why should a business owner care about his/her customers sexuality?

And how does he know if someone is gay or not, especially in a hardware store?

I’m gay and I’m glad he’s doing this. I wish other stores would do this. Then I’d know where I was welcome and where I’m not. And for those who think we want a war, you couldn’t be more wrong. We just want the same rights you have… the right to marry who we love, the right not to be discriminated against at work or where we live.

So let him keep the sign up. Tweet about his store. Post pictures up on your Facebook wall. Tell your friends not to shop there if it please you, but let the free market decide if this man’s business should sink or swim for that sign. Like it or not, his freedom of speech is tied directly with yours, and the moment his First Amendment rights go, yours does too.

so, as he screens out gay people, will he screen out other bible sinners?!! divorcees, murderers, pickpockets, gamblers, cheating spouses, child abusers!!!!! IF he does, he will be out of business……he is the one that says violating of his religion!

Unfortunately in Tennessee there is no public accommodations thingy that covers sexual orientation (or gender identity), so he’s quite free to discriminate. Whether it’s a smart business decision is another story — short-term, possibly. Long-term, doubtfully, if he stays in business that long.

His current sign doesn’t make any sense, however: no one is violating either his freedom of speech or religion. Clearly, he is exercising his free speech rights and he’s free to hold whatever religious beliefs he likes. Unless a gay person buying a wrench undermines his relationship with God?