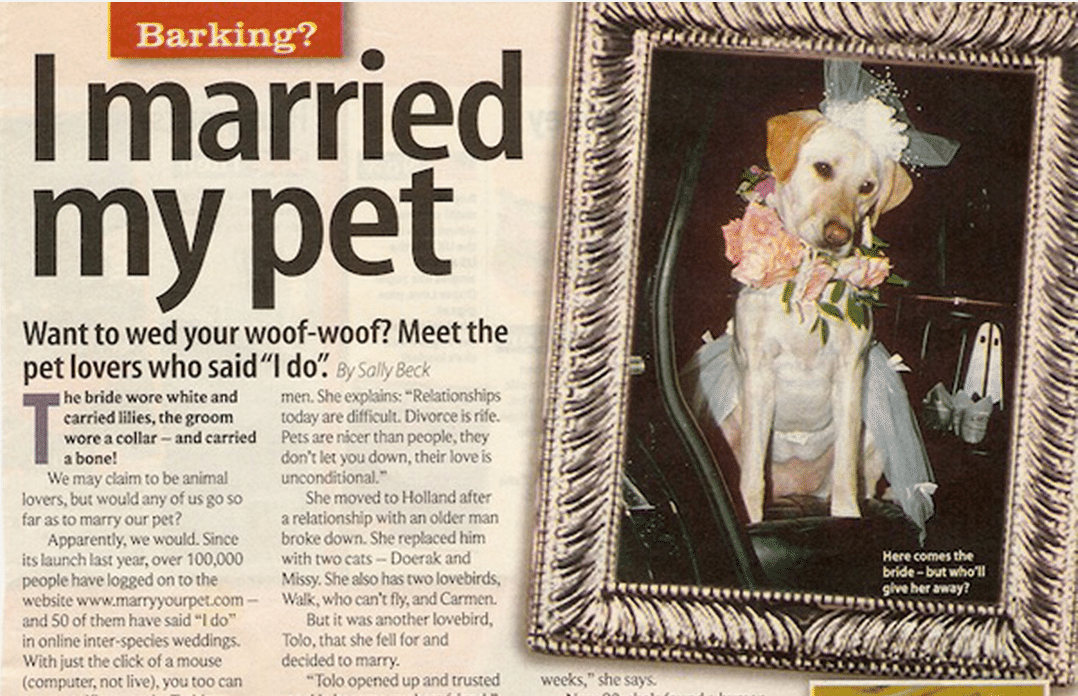 Talk about animal love. It seems Dutch woman, Dominique Lesbirel has a thing for pets, case in point, the 41 year old woman’s declaration that she is now set to marry her dog, Travis after the death of her most recent husband, her pet cat of eight years.

Pause, look out the window, notice all the fluffy cats and dogs running through the fields with chocolate waves strolling in the distance ….

The woman’s decision to marry Travis comes after her previous husband died of kidney failure. Dominique Lesbirel’s former husband was 19 when he died. That’s cat years, which for those curious translates to an impressive 92 in human years.

Told the heart broken widow: ‘Putting Doerack to sleep was horrible, I’ve had him since he was three, but I feel lucky to have had 16 lovely years with him,‘ ‘It sounds strange but I wouldn’t marry Travis just yet,’ she said. ‘It’s still too soon after the death of Doerack.’

Indeed some decorum is in need….

According to Lesbirel, she first came to meet her future husband, Travis, when she was living in Greece and the then stray dog crossed her path.

Explained the woman: ‘He would come down to the beach I swam at every day and eat from the bins or scrabble in the sand for old bits of crab,’ ‘I’d leave him food and water so he didn’t have to drink from the sea. At first he would hide in the bushes but eventually he got brave enough to come over to me for cuddles.’ ‘He’d steal my shoes and bag while I was swimming and, with it, he stole my heart.’

But things one day suddenly took a turn for the diabolical, forcing Dominique Lesbirel into a make or break decision.

With Travis struck with a life-threatening virus, Lesbirel decided in order for the dog to live she needed to take him in full time, with the couple having been together ever since.

The upcoming ceremony will be carried out through Marryyourpet.com, a website which Lesbirel set up in 2003.

After their applications to marry are approved, each couple is taken to a virtual chapel on screen, where they exchange vows.

The happy couple then click a button to say ‘I do’ and Lesbirel, who became ordained online, sends them a certificate.

To boot Lesbirel encourages couples to regard their nuptials like any other normal wedding, with the need to make necessary plans in advance, from inviting friends and throwing lavish parties to celebrate.

But lest one think that Dominique Lesbirel marries any owner and their pet, Lesbirel has other news.

Told the future new wife to be: ‘Not all applications get approved,’

‘There are rules, as with any marriage,’

Continues Lesbirel: ‘I’m happy to conduct same sex marriages, or to let people marry more than one pet. I only marry domestic animals, though. In some parts of the world, you hear of people keeping lions and tigers as pets – I wouldn’t marry people to them.’

‘I also need to be sure they truly love and respect their pet.’

And in the event you think divorce is ever an option, Lesbirel has other news: ‘The difference between a church ceremony and my online chapel is that I don’t allow divorce. I don’t want to let anybody abandon their pet.’

Whilst the novelty of marrying one’s pet has its own particular charm and childish whim, Lesbirel concedes that she does have her detractors who take pleasure in sending her hate make and even death threats.

Reiterated the woman: ‘I had people emailing me telling me I was cruel,’

‘They said I was basically promoting animal cruelty. Some were horrified and thought I was condoning bestiality, which was awful and certainly not the case.’

‘I would never condone such terrible acts of cruelty to animals. My site is all about making a commitment to pets to show your dedication to them and promise that you will always look after them.’

Addressing the creation of her site, Lesbirel offers: ‘We have such a strong bond with our pets, but if you tell people you’d rather go home to your cat than go out, they look at you like you’re insane.’

‘With a human, you can point to a ring to show you’re committed to each other but with pets, there’s no one moment of joy to mark that bond.’

‘Pets are loyal and adoring so I wanted to create something to celebrate that. We all need that unconditional love, but it can be hard to find with a person, especially when everyone withdraws behind their phone or laptop screens, so why not look to a pet instead?’

‘We’d be lost without those happy little faces at our windows, so I’ll do anything I can to remind people to treat animals with love, kindness and respect.

‘That’s why I’m planning to marry Travis. He’s given me so much happiness and unconditional love. I just want to celebrate that bond.’

What do you think? Will you be seeking to marry your pet dog or cat once your current spouse dies, cheats or just fails to give you the abundant unconditional love you crave?