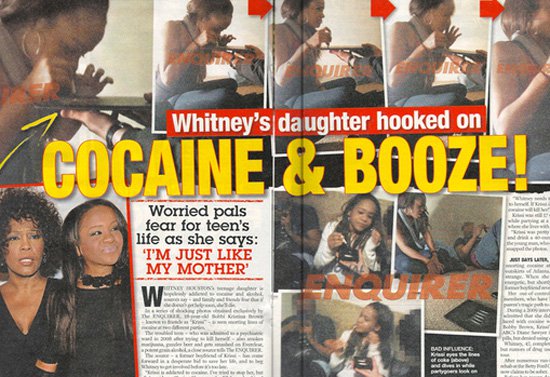 Questions have been asked as to whether famed Whitney Houston daughter, Bobbi Kristina Brown is still alive or if in fact dead after a hearse was spotted parked outside a makeshift tent erected outside the makeshift hospice Bobbi has been taken care of since being recently discharged from hospital.

According to a report via the dailymail, the mystery hearse showed up soon after a white tarpaulin tent at the back door of Peachtree Christian Hospice was erected.

Also spotted were relatives of the 22 year old, including aunt and guardian Pat Houston, Whitney’s mother.

Ominously, photos show the black automobile backing into the unexplained tent which blocked views from all angles of what was inside.

Pressed for comment, the family declined to discuss Bobbi Kristina’s condition which was understood to be markedly deteriorating since the girl’s family recently decided to remove her from the hospital where she had been staying on life support. The removal had come after doctors told the family there was little chance that Bobbi would ever recover. It was then that th family decided to let Bobbi die naturally.

Read a family statement via tmz June 24 when Bobbi was removed from the hospital where she had been staying after an apparent bid at suicide earlier this year:

‘Despite the great medical care at numerous facilities, Bobbi Kristina Brown’s condition has continued to deteriorate,’

‘As of today, she has been moved into hospice care.’

Family and friends spotted arriving at the hospice included Whitney Houston’s former bodyguard Ray Watson, who arrived looking somber and spent over 30 minutes alone in his car after his visit to his late boss’s daughter.

Bobby Brown’s brother Tommy also arrived for a visit Wednesday along with other Houston and Brown family members.

The ominous signs that Bobbi may have at last passed away comes after the much troubled daughter of Whitney Houston was found face down and unresponsive in a bathtub in her Atlanta area home January 31. At the time she was rushed to hospital where she was placed in a medically induced coma before undergoing surgery in February to replace an implanted breathing tube with a tracheostomy tube.

The end for Bobbi Kristina Brown? A white tent up at hospice, a hearse arrived yesterday… http://t.co/VgXMnpQnEQ pic.twitter.com/62glrpp7f3