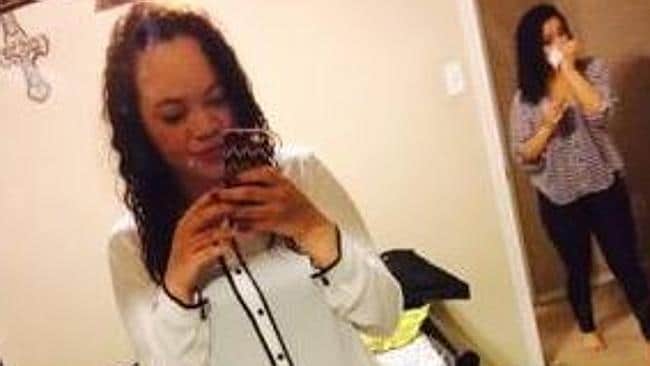 Be careful of what you choose to share on social media might be the overriding mantra after one Texas teen, Cella recently found herself being fired from a pizza parlor job even before getting her start after taking to twitter to complain about the post before she even began.

Invariably the post would be seen by her new employer Robert Waple and owner of Jet’s Pizza in Mansfield, Texas who had hired Cella to work at the pizza parlor after the tweet was brought to his attention.

Tweeted Waple (handle: @Robertwaple) a self admitted infrequent twitter user (he would admit it would be the second time to post a tweet since first getting a twitter handle in 2009) directly to Cella in a tweet that has since gone viral: ‘And….no you don’t start that FA job today! I just fired you! Good luck with your no money, no job life!’

As of time of press, Rober Waple’s tweet had been retweeted 3,800 times and favorited more than 4,200.

Since the incident has gained wide media attention, Robert Waple would admit that one of Cella’s future co-workers (but which one …?) told him about the tweet, which led him having to log on to check it out himself. 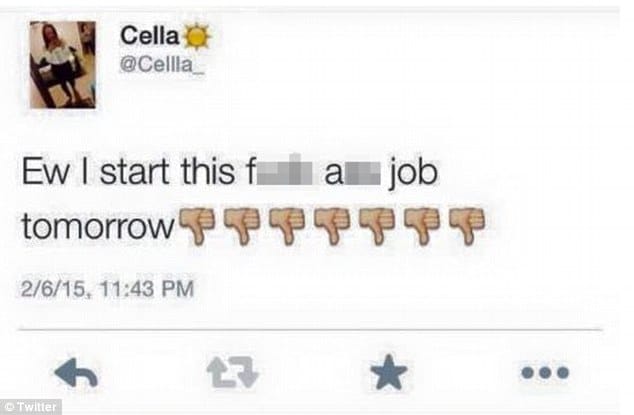 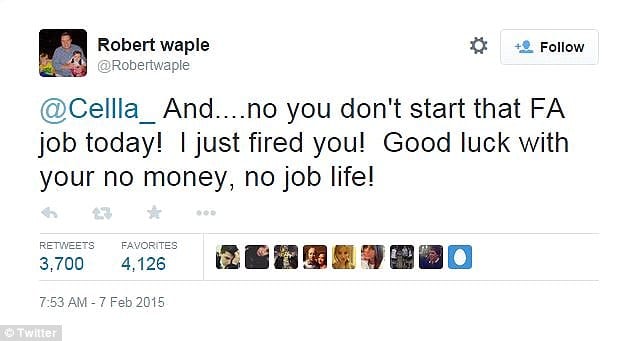 After firing Cella, several former employees chimed in to comfort Cella to say that working at Jet’s Pizza wasn’t all that great, anyway. One said it was the worst job he ever had.

One Twitter user told Robert Waple: ‘Just thought you should know I was stoned out of my mind every time I went into work, and your pizza sucks.’

He replied: ‘Being high would only partly explain how you could deliver a pizza to the wrong house…multiple times. You have no hockey skills.’

Another Twitter user rose to Cella’s defense, saying that the firing was unjustified: ‘@Cellla_ you were exercising your freedom of speech and never mentioned the company name so you got fired for no reason, contact HR asap.’

Cella, who today tweeted about having to go to a court date, seemed to take it all in stride.

She tweeted: ‘That moment when someone snitched on you trying to get you in trouble but instead accidentally gets you famous.’

As for Mr Waple – who joined Twitter in 2009 and hadn’t tweeted before the Cella incident – he gracefully excited Twitter.

‘Made my point today. I’ll check in again in 6 years,’ he wrote.

What do you think? Was Robert Waple right to fire Cella before she even had her first day, should Cellla have kept quiet or why for that matter would Cella choose to work at an outlet that she didn’t really want to work at or is that an underlying statement of what many would regard as ‘dismal’ job opportunities that so often await the young…?

And then there was this comment on the web courtesy of Joe Habes that made me wonder:

I think it’s funny how many people have no idea what “freedom of speech” means.

All freedom of speech protects you from is persecution from the government for anything you say that is not threatening or endangering to others.

It has nothing to do with:
a.) Your job
b.) Your personal interests (forums, Facebook, groups etc)
c.) Your school
d.) Your friends

You have the freedom to say what you want. You can’t be arrested for it. But that doesn’t mean you’re immune to the consequences of your words outside of the government.

You can’t say you hate your job (paraphrasing) on a public website and expect it to stay there. Twitter isn’t Vegas. 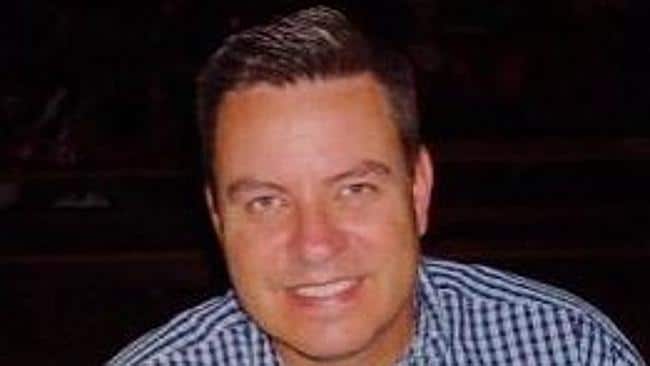 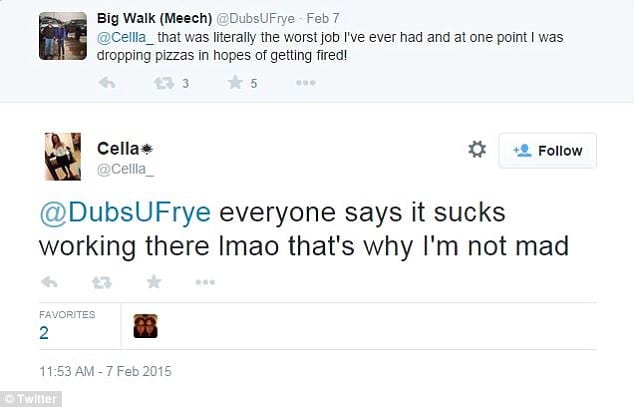