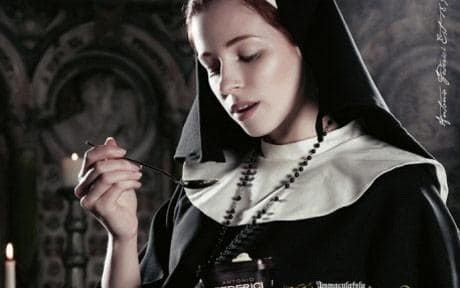 A South American nun has stunned her cloister giving birth to a baby boy after complaining of severe stomach pains.

The sister, who belonged to a convent order in Macerata, in the eastern Italian region of Le Marche, claimed to have no idea she was pregnant when she was rushed to hospital in agony, upon which she gave birth.

The South American nun, who arrived at the Chiara nunnery in San Severino  in June, when it is supposed she was already pregnant, was taken to the emergency department of ‘Bartolomeo Eustachio’ di San Severino Marche by her fellow sisters.

The baby was born healthy but remains in hospital to undergo more checks, while the nun’s convent has expressed an interest in taking care of him, according to L’Unione Sarda.

The case notes the UK’s dailymail bears a striking similarity to that of a 33-year-old Salvadorean nun in Italy, who gave birth to a baby boy last year, whom she named after Pope Francis.

She told her social worker she did not feel guilty and would raise the child saying: ‘I am so happy. ‘He is a gift from God. I feel more of a mother than a nun.’

At present it is not understood if God or the holy spirit fathered the child, assuming there are no other more mortal possible contenders….?

And then there was this comment on the web that brought out a rueful smile on behalf of this author:

Leave the convent and take care of your baby. And go to church on Sunday and say your prayers before you eat and before bed. Your all good. Oh, and don’t swear, or consume alcohol unless you go to communion. You need to confess your sins everyday for the rest of your life or the Almighty will not open those pearly gates for you. Don’t talk to strangers, don’t have sex unless your married, and go on Christian Match for your husband. On second thought, stay where your at.