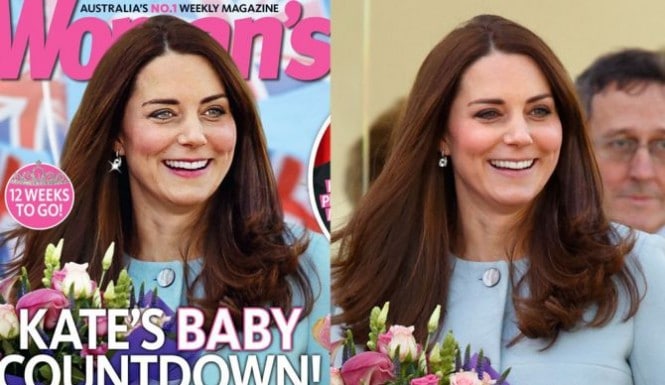 ‘Why bother?’ might be the first reaction upon observing Australia’s Womans Day magazine cover of Kate Middleton who looks almost unrecognizable and almost cartoonish in what can best be described as a photo shop fail of garguntum proportions.

Appearing on the cover, pregnant Kate is dressed in a blue coat smiling warmly (uber sacharine might be a better description) whilst clutching a large bouquet of flowers, hideously unaware of what some Australian editorial team is about to do to her image.

Instead of a natural reproduction of the original image that led to the cover, Woman’s Day editors inexplicably decide to markedly lighten the royal’s eyes (think roller skating disco) whilst adding an obscene layer of high school prom pink on her lips. Even Kate’s earnings come in for some treatment as they are made to sparkle beyond infinitum.

What makes the cover equally beguiling is Australia’s Woman’s Day is a top women’s weekly magazine with a respectable circulation of 320,398 and a readership of around two million.

The faux pas comes after US publication, Star magazine was savaged after bungling a photo which saw Kate sporting a prominent baby bump, claiming that she was pregnant with twins.

What do you think, has the media once again gone overboard and what is it about insisting on making trusted sell out decoys so kitschy and beyond surreal and appropriating women to appear anything but what they really are?