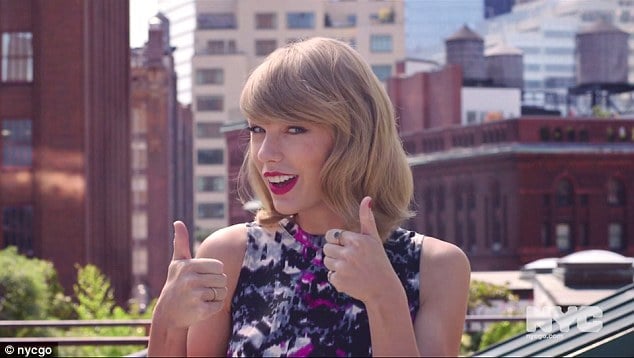 For whatever reasons that have yet to have been fully understood the powers that be have elected country/pop seductress Taylor Swift as the new NYC ambassador. An accolade that has since led to many long term New Yorkers seeing red and wondering why such a white washed face is being trumpeted as the face of a city that has been anything but during its illustrious ascent.

Appearing on Good Morning America, the 24-year-old consumer staple who was born in Wyomissing, Pennsylvania, and grew up in Nashville, said: ‘I’m so enthusiastic about this city that I feel like, when I love something, I’m very vocal about it, I’m vocal about it with my music.’

Which begs the question whatever happened to those musicians that have been struggling to make it in NYC, or those actors, or writers or film makers? How did they come to be passed over as the majestic title of the American dream or why indeed anyone really (or at least used to) turn up to NYC? Did we really have to turn to an antiseptic version of Goldilocks to land the pot of honey?

Are we to reason NYC is now a behemoth of tourist extravaganza experiences, where white washed experiences are the go and the nitty gritty which once inspired the likes of Andy Warhol, David Bowie, The Ramones, Lou Reed are just mere sighs and half excited gestures at the hands of tour operators?

Offered Twister Sister star Dee Snider: “I’m incensed! It’s insulting… she doesn’t have any life experience here… there are so many others – Jerry Seinfeld, for instance, if you want a big name… but Taylor Swift moves into town, and she’s the ambassador.”

And then again perhaps it all began to go downhill when Carrie Bradshaw of Sex and the City made it on the scene in the early 2000’s.

Aspirational New Yorkers quickly learnt that making it in NYC wasn’t about grit or sticking to one’s guns, their creativity, their spunk, their originality, their verve, but how well they dressed, who they got to date, where they went to go out, how many pair of Manolo Blahniks they could afford and that self realization was really just a credit card away or two away.

Money began to flock, yuppies and trust fund hipsters clambering to live in once forlorn neighborhoods where one has to spend $4;50 for a caffe latte, the artistic class which once defined NYC further pushed out and increasingly forgotten and in turn disillusioned. Ride on his timeless reputation but trade on the aspirational banker’s cache (who now owns NYC) and access to hubris and money accolades.

In recent years making it in NYC has depended on one’s ability to appear in social pages, reality shows and not necessarily because of one’s talents (the talent it seems is getting in front of the press) but simply because of one’s looks, title, ability to turn up at a party or if one need to just make a sex tape. At least Taylor spared us that one and came up with the odd jingle or two.

In the age of plastic, hyperbole, irrational aspirations, revolving fear episodes (terrorists are always we are reminded an inch from gutting us all) what matters most isn’t edge, guts and being a little on the outside (which used to define NYC ) but increasingly being on the inside, on the public relations radar and wherever big money chose to park their spare dollars. Something that Taylor Swift has quickly come to find out as she settles in her $20 million Tribeca penthouse. A wet dream indeed…

And here’s the version I wish they got to play instead: