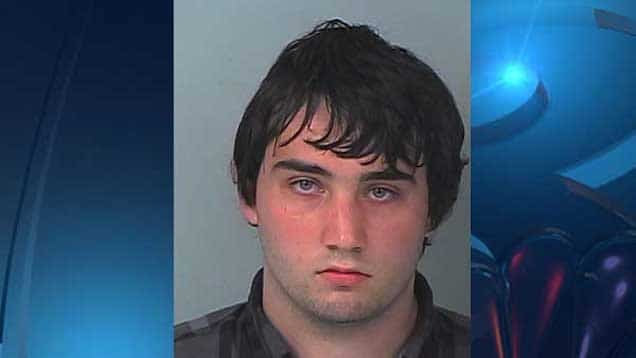 It seems being a teen with a raging libido has to be one of the most arduous and fraught dispositions to reckon with, case in point, 19 year old Florida teen Sean Johnson who came to be arrested after surveillance cameras picked up on him making love to a stuffed animal at a Tampa, Walmart store.

According to a police report via thesmokinggun, our collective hero ‘selected a brown, tan, and red stuffed horse from the clearance shelf in the garden department.’ He then went to the comforter aisle in the housewares section, ‘proceeded to pull out his genitals,‘ and ‘proceeded to hump the stuffed horse utilizing short fast movements.‘ Naturally this shit was captured by surveillance cameras.

After Johnson ‘achieved an orgasm and ejaculated on the stuffed horse’s chest area,’ (one is obliged) he placed the ‘soiled stuffed horse on top of a bed in a bag (comforter set) contaminating that property also.’

Fleeing the store before he could be apprehended by Walmart security, our collective hero would be later arrested by Brooksville Police Department officers. In a written statement, Johnson admitted that, ‘I did unmentionables to a stuffed animal.‘ Noting that he committed a “horrible act,” Johnson added, “I need to think before what I do. I’m extremely sorry.”

For his troubles our collective hero was charged with indecent exposure and criminal mischief (oh well another story to tell at the next stuffed animal expo) and booked into the Hernando County jail. He was released after posting $1500 bond. But think of all the fun that money bought kids…

Interestingly the Walmart merchandise that came into contact with the re shelved stuffed animal was deemed contaminated and not suitable for sale. Can you guess why?