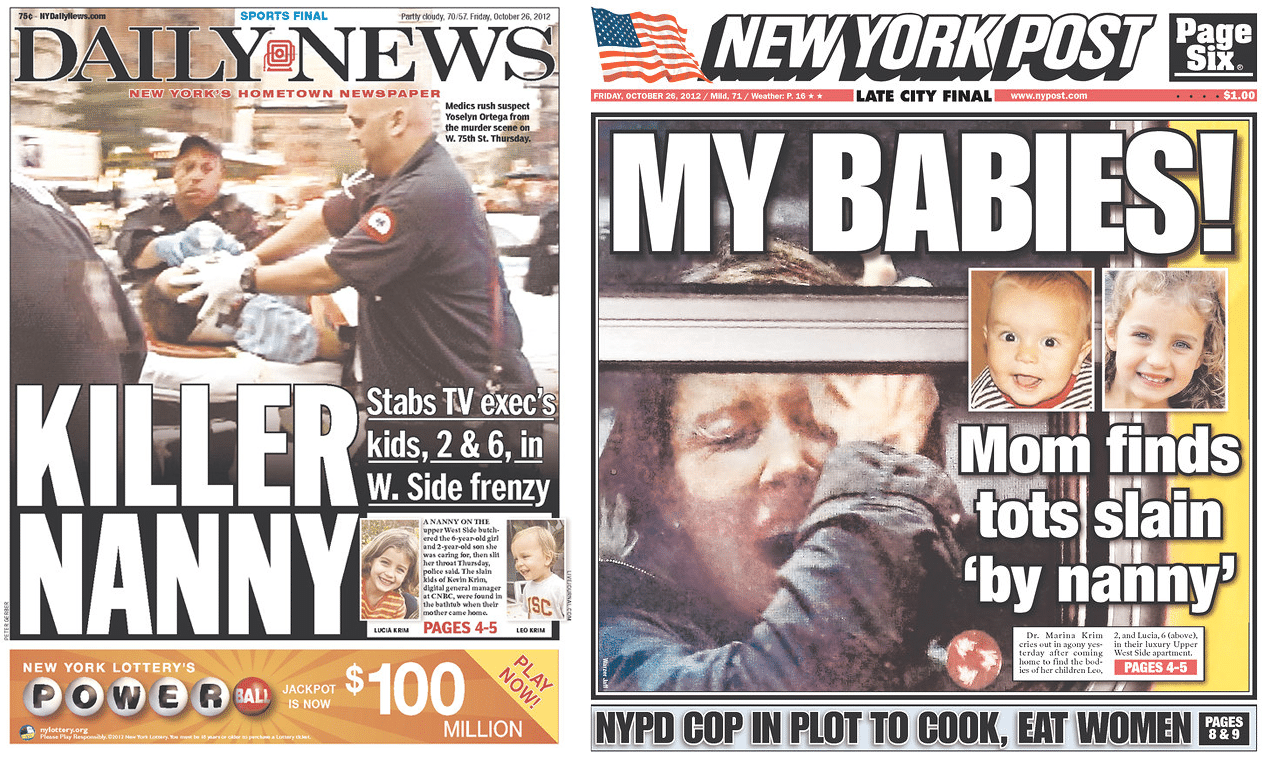 The nypost has come out with a feature describing the newly exulted anguish of well to do mother Marina Krim‘s over having to greet the visage of Yoselyn Ortega‘s sister, Celia Ortega who is charged with picking up the child of her client as luck would have it at the same school her surviving child of the Krim 2012 murders also attends.

The shocking revelation has the mother told in an email note passed along to friends and now in the possession of the nypost told of Marina Krim’s mortification of having to meet the ‘glare’ of her purported look alike killer’s sister, Celia.

Reports the nypost: Marina Krim found out the week before school started that the family that employs Celia Ortega lived near them once again.

“Can you imagine my anxiety as I am walking out of school with Nessie and on a daily basis wondering if I am going to run into this woman?’’ a distraught Marina wrote in an email to friends.

“She introduced us to the defendant who murdered our kids and Nessie’s sister and brother,’’ wrote Marina — who is still unable to utter or even type Yoselyn Ortega’s name — in the email, a copy of which was seen by The Post.

“Making it all worse, we now find out she lied about the defendant’s background to improve the chances of us hiring the defendant,” Marina alleges in the email, noting Celia Ortega is the one who recommended Yoselyn to her.

“Now, Marina is reliving her nightmare every day,’’ a close friend said about school pickup time.

The issue of the Krim’s accused killer’s sister being a caretaker of the daughter of Henley Vazquez has so distraught the mother that she has demanded that the Vazquez’s caretaker now be made to arrive 15 minutes later after school closing so Marina Krim can be spared the ignominy of having to greet the visage of her purported killer’s family.

Nevertheless the request has led to divided opinion as to whether the well to do mother is necessarily being fair in her demands and one wonders why she has stirred the pot again by brining further attention to a harrowing episode in the family’s life.

Some commentators have since questioned the sanity of the Vasquez family, wondering if they too don’t fear similar consequences befalling their family by choosing to employ a purported killer’s sister and whether the genes of a ‘madwoman’ can be passed on to other family members?

Granted Marina Krim deserves our compassion and sympathy for the horrendous ordeal her and her family have been put through yet one does wonder if the nypost and the Krims are going too far in asking others who had nothing to do with an individual’s decision to cause havoc to make allowances for her tethered frame of mind?

Below are a sampling of comments on the web that made me wonder:

While I’m saddened by their loss. They are wrong on this. They are blaming the innocent woman for her sisters actions. They should not have to power or the right to try to control another person or another family. If they are finding it to hard to stay there then they can only control their lives to change it.

Whilst I feel bad for ms Krim , Ms Ortega is not responsible for her sister’s actions. Nor is her employer. They reached a pseudo compromise. The woman wears a disguise picks up at a separate time etc etc. you want the family to fire her to appease you Nine if this will bring back your babies. It hurts but time will heal your heart

I can understand the reasoning for the mothers plight, but the twin sister was not convicted of murder and she can not help that she is the spitting image of her sister. Does she not deserve to live and work because of her sisters crime? It is such a horrible story, I feel horrible for the family, but the twin didn’t do it!

While these parents have my sympathy for what happened, the sister did not commit the crime, and she and her employers have the right to go about their lives as they see fit….they have no obligation to broker any “deals” to restrict their movements, what time they pick up their children or who picks them up.