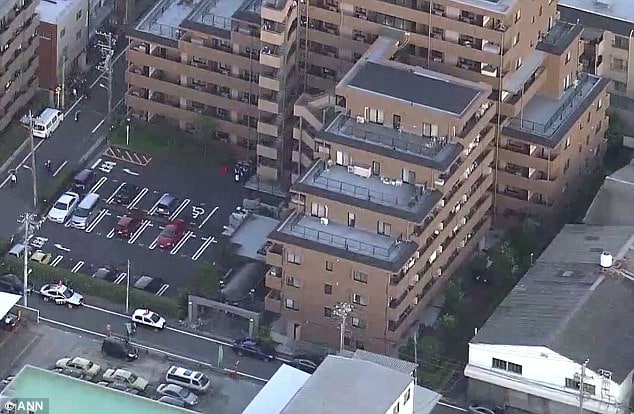 Two Japanese girls committed suicide over the weekend, in the process leaving a whole nation dumbfounded after the the girl’s shoes were found neatly placed side by side before the two girls jumped from a Tokyo Ota Ward district building.

Police would tell that the elementary schoolgirls, aged 11 and 12, made the fatal leap between the seventh and eight stairwell floors of the building.

Police would also tell that the girls had left a suicide note with their neatly-laid- out shoes, but declined to reveal its contents.

‘The note is a matter for the parents – it is personal,’ said a police spokesman.

Police said the 11-year-old lived with her family in the apartment building, while her 12-year-old classmate lived nearby.

Baffled school officials would reiterate that the girls had attended school on Friday and had apparently got on well with their classmates. Adding  that they were not aware of any bullying incidents involving the girls that may have precipitated a desire to take their own lives.

‘There had been no incidents of bullying or anything like that,’ said a school official.

‘They were in the same class and appeared to get on well with everyone.’

Their classmates said the girls were both bright and considered as leaders among their friends.

‘They did not show any signs of being worried about anything,’ said a school friend.

After removing their shoes the girls jumped, one dying instantly when they hit the asphalt parking lot near the entrance to the building. The other child died shortly afterwards.

Commented social media users notes the UK’s dailymail: ‘How do you possibly comment on this?’

‘What was wrong with the lives of two young girls to make them want to kill themselves,’

Told another: ‘I hate to think what they must have suffered to the point they thought jumping off a building was the best thing to do,’

‘They were failed by the adults around them.’

A report by the World Health Organisation ranks the suicide rate in Japan as fourth among high-income countries.

The report found that in 2012, when the latest statistics were compiled, Japan had 29,442 suicides that year behind South Korea, Lithuania and Russia.

Many of the deaths, WHO reported, were among people aged 70 and over.

And then there was comment on the web that made me wonder:

Bullying doesn’t have to be physical doesn’t even have to be verbal. Simply ignoring or neglecting someone can be bullying. It could have been anything from something someone in their family said or didn’t say to a teacher being harsh in their criticism knowing they could do better and they just took it the wrong way or something as simple and believing they were going to fly to another planet. Though no one will truly know what they were thinking without the suicide letters. Maybe there is still an ongoing investigation depending on the content or way is which the letters were written. It is sad to think that someone so young could fathom their life having no meaning when they haven’t even begun their life yet.

Japanese media drops hints that the reason might have been the excessive stress around their JHS entrance exams. They were supposed to go to juku, which they went to together, but missed today. They were described as excellent students, leaders in their class, but recently used to complain about their increased workload, and decreased time for sleep.