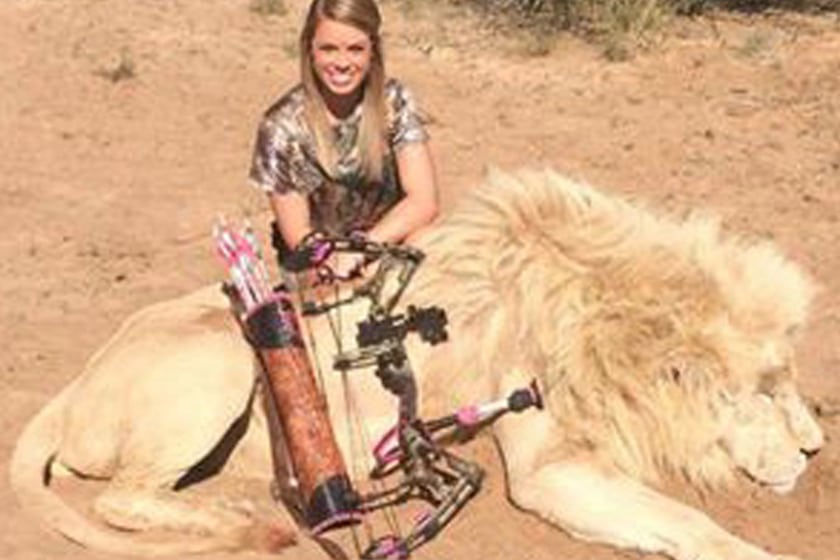 Kendall Jones the 19 year old Texas Tech cheerleader who has since come to cause a social media firestorm after posting images of her hunting kills in the plains of Africa yesterday evening once again took to Facebook to defend herself against her detractors.

In a typo-laden defense that invokes the safari-loving 26th U.S. president Teddy Roosevelt, the Texas Tech cheerleader first took to her facebook wall claiming that killing rare rhinos and elephants actually helps to save them.

Writes Kendall Jones in a July 1 posting: ‘This is a conservation effort to assure [sic] that they never do become extinct,’

‘[Roosevelt] was a hunter too, right? He killed the same species that hunters now chase today under a mound of anti-hunting pressure.

‘Yet, how can it be possible that someone can love the earth, and take from the Earth in the name of conservation? For some folks, they’ll never understand. For the rest of us…we were born that way. God Bless Teddy,’

Perhaps hoping that would quell the dissent, it as expected did quite the opposite with detractors taking in droves asking for Kendall Jones own head. 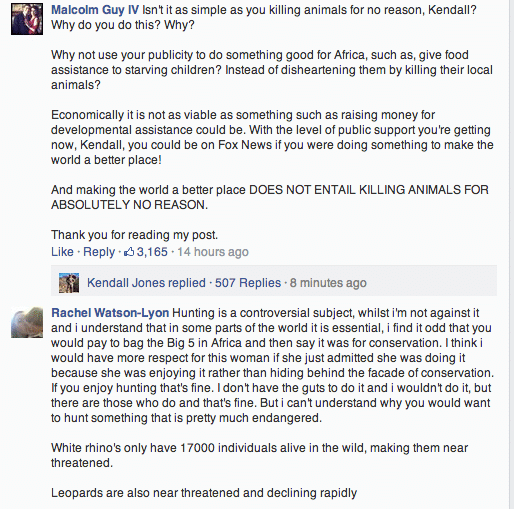 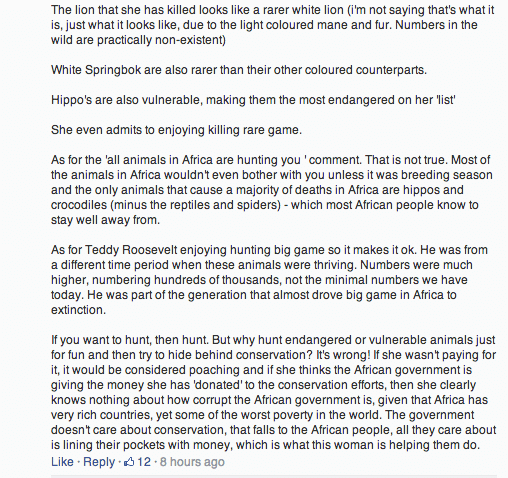 And in a posting defending her actions yesterday, the teenager hunter once again attempted to defend herself.

“Why has the southern white rhino fared better than the other species and what can we learn from this? Economics provides the answer! White rhino conservation efforts were driven by South Africa, which has developed a vibrant market economy for wildlife within the last 50 years. This economy rests on three pillars:
1.Recognizing and actively developing legal markets for things that people value about rhinos, such as tourist viewing and trophy hunting
2.Allowing private landowners to legally own rhinos, thereby giving them strong direct incentives to manage them responsibly
3.Enabling all landowners (private, communal or public) to retain the money they earn from selling live rhinos and rhino products, thus making rhinos a lucrative long-term investment”

Despite Jones’ increasing efforts to defend her actions, detractors in kind responded with increasing vigor, as evidenced by the fact that as of Thursday afternoon 225,000 global animal lovers had signed a petition urging Facebook CEO Mark Zuckerberg to take down the photos in which Jones smiles proudly over the corpses of her prey she claims to be saving from extinction.

Yet whilst scorn has been raised towards Kendall Jones and those who choose to hunt, some users in fact took to Facebook to defend the cheerleader by creating a facebook page called Support Kendall Jones.

Reads the page which to date has amassed just over 8200 followers: ‘Support this teenage girl who was attacked for posting pictures of her game that she legally harvested while in Africa,’

Nevertheless an avalanche of critics are appalled by the teen and have taken to calling Kendall sick and depraved for killing the rare animals and boasting about it online.

Writes one petitioner:  ‘For the sake of all animals,’

‘especially the animals in the African region… where hunters are going for fun just to kill an animal!’

Jones, whose Facebook indicates she ‘is looking to host a TV show in January 2015,’ has increasingly maintained she is simply doing what’s best for the preserves (and one wonders what’s also best for herself), where there isn’t always space for even threatened species like elephants or lions.

Writing: ‘Controlling the male lion population is important within large fenced areas like these,’

‘Funds from a hunt like this goes partially to the government for permits but also to the farm owner as an incentive to keep and raise lions on their property.’

That said, a second petition has been created in an effort to have Kendall Jone’s hunting rights taken away all together, with many pointing out the teen’s avid enthusiasm for killing rare game along with what many have come to regard her dubious standing as a conservationist.

Tells the petition which as of press has gained over 105 000 signatures: ‘Kendall Jones is an American born hunter who has entered the continent and has been hunting African wildlife under the facade of conservation,’

It continues: ‘She has publicly stated that she hopes to have a television hunting show and she is using endangered and helpless African animals as a stepping to further her popularity on social media platforms.’

In her latest post, Jones interestingly made no mention of her apirations of hosting a reality hunting show, insisting perhaps to an audience that beginning to ask the legitimacy of the girl’s hunting that she is only seeking to perpetuate the economic viability of African states. A viability that Jones and other hunters like her only serve to degenerate as they brazenly hunt down the rare game that once made African nations the focal point of tourism and trade. 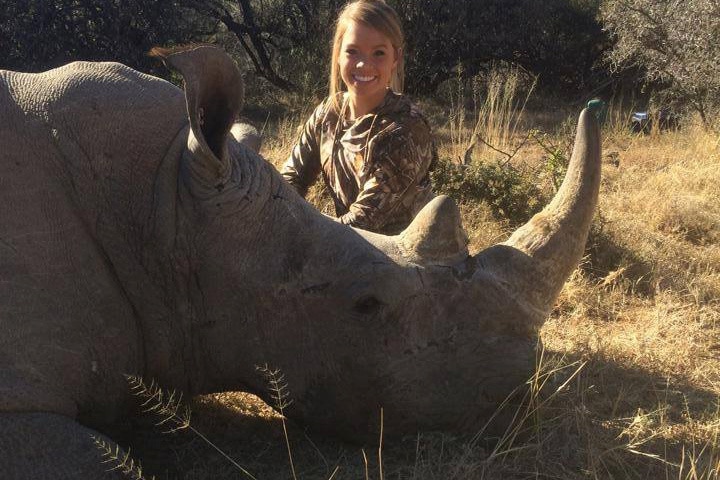 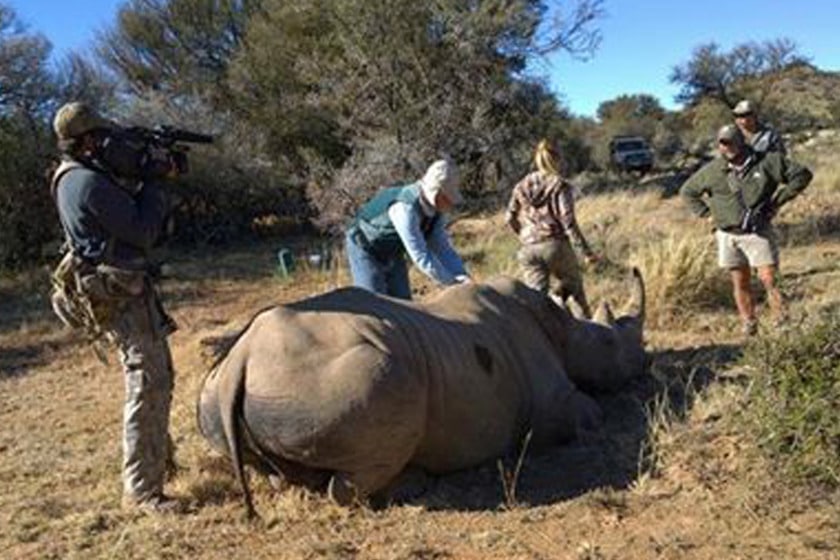 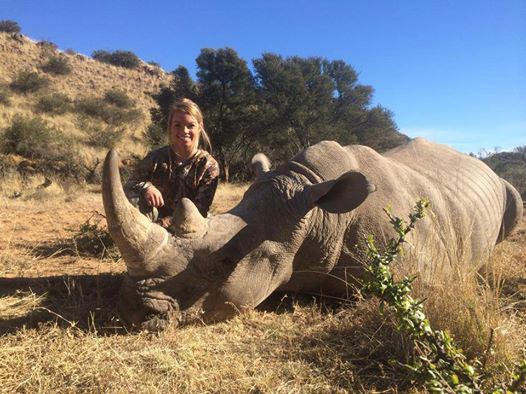 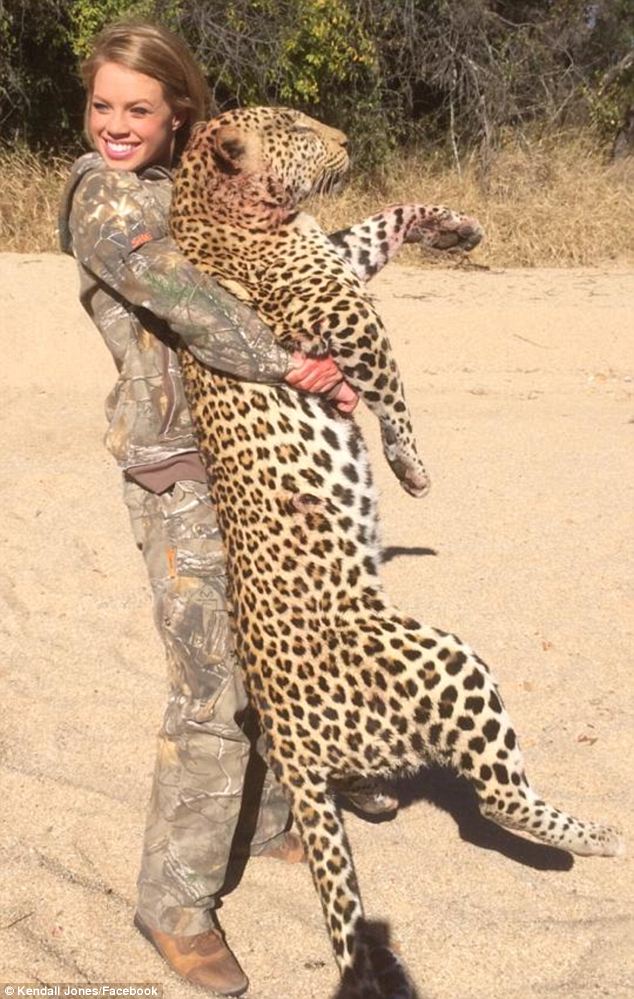 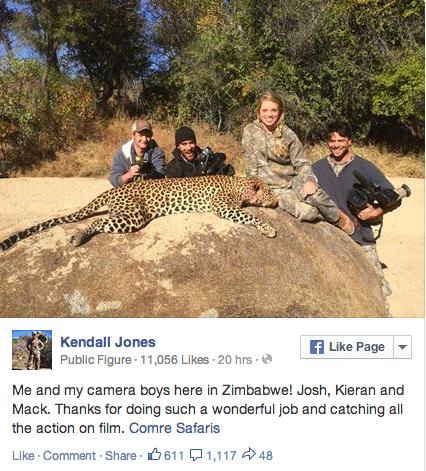 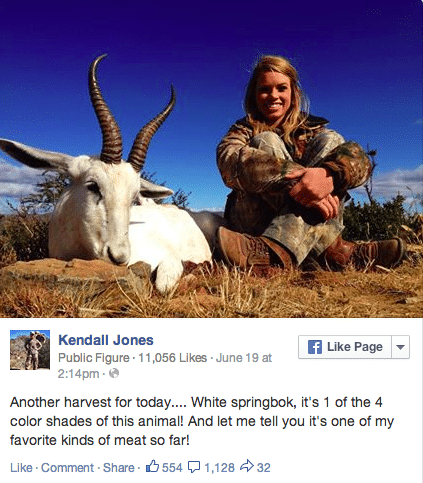 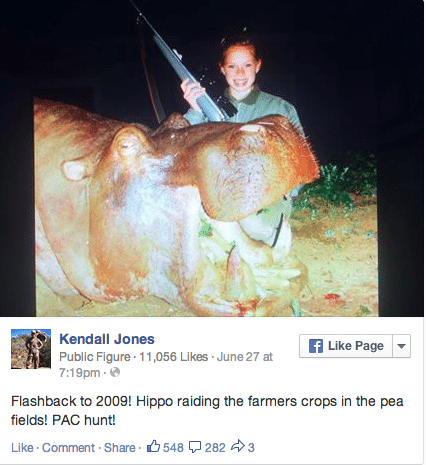