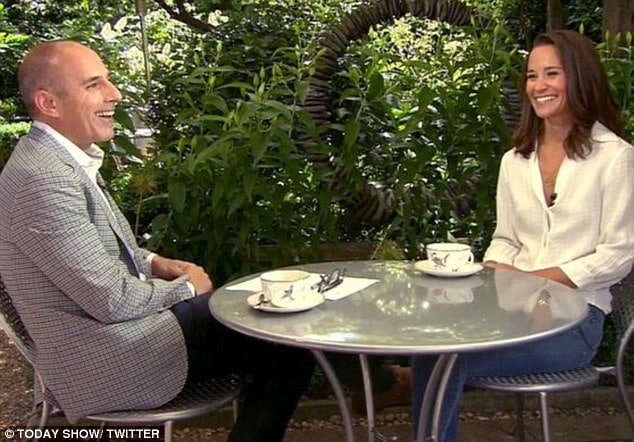 If only you could be the nonchalant effervescent socialite Pippa Middleton is too….

Along with charity bike rides it seems Kate Middleton‘s sister, Pippa Middleton is on a mission to explain to American audiences that she’s no longer the wild child of yesteryear but actually the personification of elegance, pizazz and genteel manners. Which is only too well given Matt Lauer’s own reputation for perfect chamomile tea manners.

Oh really? Pippa Middleton is told by sister Kate to stay out of the limelight

In a two part interview series filmed for NBC’s The Today show in the UK, Matt Lauer sat with Pippa Middleton over tea (naturally) to discuss the subtle disposition of being a well to do socialite on the go.

Sitting in a charming English garden the media icons of favorable tea manners came to languor as they tastefully admired each other’s glowing tans and mentioning something about having recently been on a long bike ride. Which is a backhand way of saying, ‘I haven’t been on any embarrassing jaunts of late that might discredit my royal connections.’

Asked how she found her bicycle ride across America, our collective hero beamed, ‘It wasn’t too bad. I think I chose a particularly comfy saddle.’

Which is a muted way of keeping public relations in tip top form and straying from potentially embarrassing questions.

But lest we think Pippa is to rest on her party planning laurels and occasional book writing engagements, our collective media darling would come to reveal that she is now on her way to Istanbul where she will take on the Bosphorus Cross-Continental Race, a 6.5km historical swim that crosses from Europe to Asia.

Presumably another heroic feat that will have the royal family at last calmly smiling and Matt Lauer gingerly balancing his very nimble cup of chamomile tea cup….