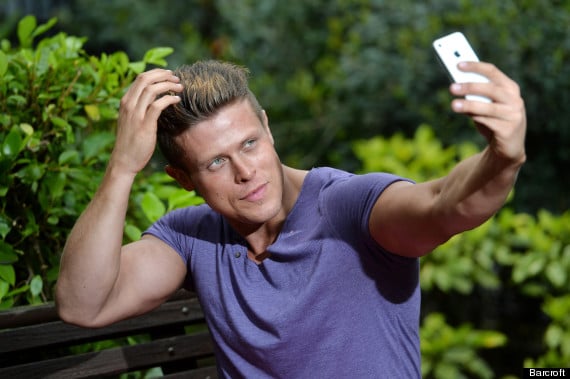 For Matt Dunford, looking good isn’t just a rite of passage it is a deed steeped in religious fervor. Such are the preening demands of the personal trainer who qualifies himself as Britain’s vainest man.

Along with hitting the gym, and grinding on the dance floor as a Dreamboys stripper, Britain’s self proclaimed vainest man also takes to spending his ‘hard earned’ money on eyebrow shaping, lash tinting, spray tans, as well as manicures, pedicures, waxing and facials.

But it’s worth it tells the pretty boy who confesses he’s never been turned down by a woman he has approached.

Tells Dunford who admits sometimes he finds himself fending off hordes of women trying to win a date out of him: ‘Some people think I’m arrogant and I’ve had men start fights with me on nights out – but they’re just jealous. There’s nothing wrong with wanting to look good.’

‘I have been gifted with good genes and it’s meant I’ve never suffered with self-confidence issues.’

Despite all the attention he pays on his hair, eyebrows, hands and feet and of course physique, asked what he thinks is his best feature, the fitness trainer who to date has slept with more than 50 women and been over 100 dates, it’s his face which he opines is his best feature.

Reiterates our collective ray of good-looking stupor: ‘I know I look good and I know I’m very popular because of the way I look,’

‘I’ve never been knocked back by a girl – they just seem to throw themselves at me. It’s my looks that reels them in – but I am a gentleman when it comes to relationships.’

And although he has no problem reeling them in, Matt likes to stick to pretty petite blondes with nice nails and impeccable make up.

Yet lest you think Matt is solely into looks he also likes to make sure his women are at least somewhat reasonably intelligent.

‘I’m not super intelligent but I just can’t stand it when some girls play dumb,’ he reveals.

‘If there’s nothing between the ears I know straight away that it’s not going anywhere. But I don’t really care about relationships or girls, I’m more focused on my career – and I get bored of them quickly.

‘I’m quite ambitious but a lot of girls my age just want to settle down and have babies.’

That said our collective hero does acknowledge being too good looking does come with pitfalls.

Reiterates our golden ray of sunshine: ‘Sometimes I’m out and I just want to have a quiet night and I’ll be hounded by women grabbing my bum,’

‘I can’t really complain but it does get tiring. Past girlfriends have been really jealous of the female attention I get.

‘There have even been Facebook spats between girls who want to be with me – it’s crazy.’

Despite spending a sizable sum on his looks, Matt insists it is money well spent, and an investment in his future.

‘My whole life and career is based around my looks – whether that be stripping, modeling or working as a personal trainer.’

‘I have to look good for the audience and my clients. I’m a walking advertisement for my services and my appearance and how I hold myself is very important.’

‘I know I make money and get business based on my looks, but I’d be mad not to take advantage of being so attractive.’

Asked his thoughts on plastic surgery, Matt Dunford tells he would never consider it, on account of the fact that he is already perfect.

Reflects Dunford: ‘I think plastic surgery is only required if you are struggling to get results,’

‘I’m more than happy with my face and body and I don’t think surgery would make me look any better.

‘If I wasn’t 100 per cent happy with my look I’d maybe consider it, but when you look like I do naturally then it’s money and risk that is unnecessary.’

Set to earn circa £100,000 this year from his various jobs, Dunford is a regular at his local salon and spares no expense on cosmetic treatments. Naturally.

‘There is no excuse for bad skin or hair,’ he tells. ‘I have regular facials and professional shaves to keep my face silky smooth,’

Adding: ‘I cleanse and moisturise obsessively to keep my youthful radiance,’

‘There is no excuse for bad skin or hair,’

‘I have regular facials and professional shaves to keep my face silky smooth.’

Matt Dunford then goes on to tell how a two year relationship came to a close this past February (can anyone guess why kids?) and him not feeling too bad on account of all the offers he gets from wanton women.

But it’s when he talks about his parents things go a little askew, when our collective ray of sunshine admits that they don’t entirely understand his obsession with looking good.

Reveals Dunford: ‘I kept some things from my parents for a while, especially when I started stripping,’

‘I didn’t know what they would think.

‘I think they are a bit flummoxed by my spend on my appearance, but looking good helps me earn more.’

But while Matt Dunford’s parents may have some reservations about their son’s preoccupation with looking good, there are others who Dunford admits are simply too jealous of his youth and beauty, telling of one incident which required him having to be hospitalized:

‘I had to go to hospital and have 12 stitches in my head. But I was lucky – it could have been far more serious.

‘I’ve also been smacked across the face and had to have metal pins in my jaw, so I’ve got scar tissue down the side of my face.

‘I never start it. It’s just blokes taking a dislike to me for maybe the way I hold myself, or because they think I looked at their girlfriends.

‘I get jealousy and people trying to bring me down but I just don’t react to it – it’s just part and parcel of being this good looking. But If I saw another me – I’d probably get jealous.’

If only Matt Dunford could be jealous of you too…