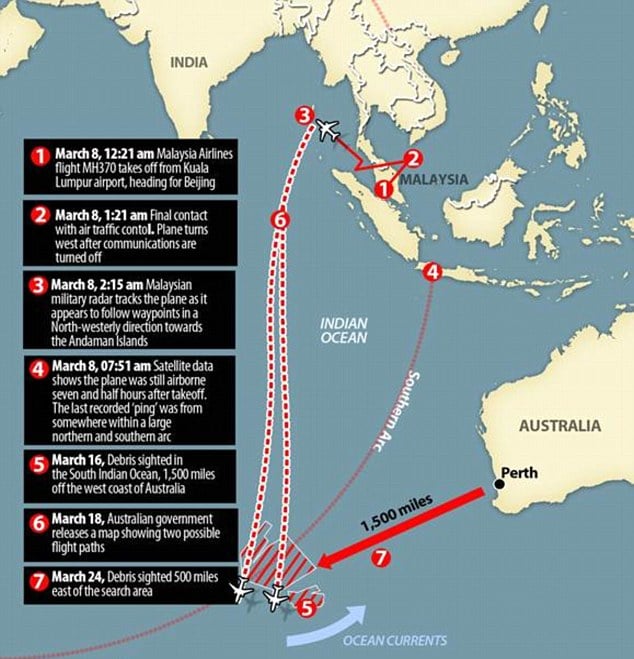 Suicide is now being laid as the most likely outcome as to why Malaysia Airlines flight MH370 vanquished.

The assertion comes after Malaysian military radar recorded the plane flying at an altitude between 43 000 to 45 000 feet shortly after its final communications with the ground.

Told a source to the UK’s dailymail: ‘It was tracked flying at this altitude for 23 minutes before descending. Oxygen would have run out in 12 minutes [in a depressurised cabin], rendering the passengers unconscious.’

The source added that several other experts in the industry had come to the same conclusion.

The 777-200ER Boeing aircraft used on the flight is known to have a maximum service ceiling of 43,000 feet and can very probably fly safely at even greater heights, one expert told.

Nevertheless at that altitude it would take mere minutes if not seconds for hypoxia – a lack of oxygen – to set in if the cabin was manually depressurised by one of the pilots as air rapidly thins.

Oxygen masks would have dropped down, but these only supply between five and 10 minutes of gas.

Andrew Rae, Professor of Experimental and Applied Aerodynamics at the University of the Highlands and Islands, said: ‘The venting of cabin pressure would be a problem at 10,000ft, 30,000ft or 43,000ft, but the extra height might perhaps make things happen more quickly. The fact that the aircraft flew at 43,000ft should not itself trigger the emergency cabin oxygen supply.’

The air used for pressurising the cabin comes through the engine and wing and is filtered before it enters the passenger environment.

A pilot might need to turn off the pressurisation system if the aircraft enters dirty air, but investigators are looking at the possibility that it was disabled for sinister reasons on MH370.

Scientists at British satellite firm Inmarsat used a wave phenomenon discovered in the nineteenth century to analyse the seven pings its satellite picked up from MH370 to determine its tragic final destination in the southern Indian Ocean.

From the time the signals took to reach the satellite and the angle of elevation, Inmarsat was able to provide two arcs, one north and one south that the aircraft could have taken.

Inmarsat’s scientists then interrogated the faint pings using a technique based on the Doppler effect, which describes how a wave changes frequency relative to the movement of an observer, in this case the satellite, a spokesman said.

Britain’s Air Accidents Investigation Branch and experts from the European space industry were also involved in the analysis.

The Doppler effect is why the sound of a police car siren changes as it approaches and then overtakes an observer.

Using this technique, Inmarsat was able to rule out that the aircraft had travelled in a northerly direction.

Yet not everyone is convinced it was a suicide mission that brought down Malaysia Airlines flight MH370.

Chris Goodfellow, a Canadian pilot with 20 years experience believes that a fire broke out aboard the plane.

He claims captain Zaharie Ahmad Shah was doing exactly what he needed to do in an emergency – and trying to get the plane to the nearest airport as soon as possible.

Police have interviewed more than a hundred friends and family members of the pilots, conducted a forensic investigation of a flight simulator seized from Zaharie’s home, combed through their laptops and flying records, and enlisted the help of the FBI and Interpol. But a source involved in the police investigation told The Telegraph: ‘We are still clueless. We have not collected anything suspicious.’

Malaysian authorities have come under intense criticism for their handling of the ordeal, including claims they hid information and bungled the search.