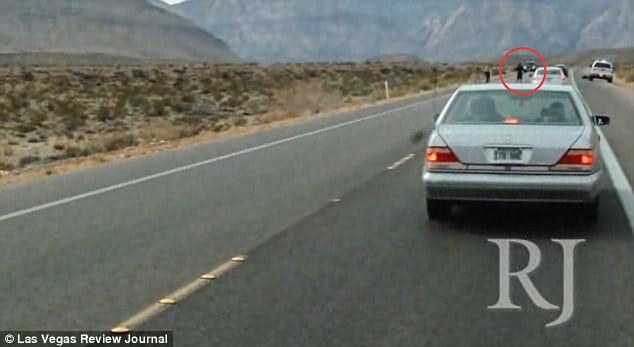 Making pundits dizzy is the visage of shocking video of a federal ranger shooting dead a man on a Las Vegas, Nevada desert highway. The shooting has since been dubbed redneck justice.

The scene begins as two horrified men watch in a nearby car with a smartphone camera as federal rangers pull up to a man who has been aimlessly walking along the side of the highway, trying to flag passerby’s.

Rather than acquiesces to the demands of officers the wandering man, since identified as D’Andre Berghardt for reasons not understood, becomes belligerent, resisting officer’s overtures.

By now having resisted arrest, rangers proceed to pepper spray the man. Although cops approach Berghardt repeatedly, video stills do not show them ever trying to take him to the ground and handcuff him.

Tell the men videotaping the scene:

“You know what’s ridiculous about this is, they never grabbed him,”one of the men said in the video. “They could have grabbed him. They kept letting him get up.”

After a state trooper pulls up, Berghardt runs, swings wildly, escapes the officers, and finally opens the door of a trooper’s SUV and climbs in. At that point one officer fires ‘eight or nine shots’ into the vehicle, killing Berghardt.

At the time of the shooting, the two men who have been filming the incident can be heard saying the following:

“These cops are not taking the prerogative to …”

The Las Vegas Review Journal writes that ‘the officers say Berghardt grabbed for the trooper’s AR-15, which was locked in a gun rack in the car.’

Less than a minute after the killing, traffic begins flowing again.

Since the release of the incident which took place along a barren highway near the Red Rock Canyon Conservation area, commentators on the web have taken to both condemning the rangers whilst others went on to praise them.

Sample comments (via gawker) have included: I think police in this country needs to make a choice. They are either:

a) Heroes who put their life on the line everyday (even though 99% of them spend their day sitting in a car).

b) Gigantic pussies who shoot unarmed citizens at the slightest hint of danger.

Here’s a thought: The assault rifle WASN’T locked-up. The cops knew this, shot the guy to protect themselves and civilians in the area, then lied about the security of the weapon in their reports.

Perhaps. If they had just arrested him the multiple times they had an opportunity, it wouldn’t have escalated to that point. Maybe they were concerned about dirtying their uniforms?

So did we ever find out why he was wandering around out on a scrub land highway in a disoriented fashion trying to flag motorists down?

The guy could have been lost, or something bad could have happened to him and he had no idea where he was, could have suffered from mental illness…dropped off by drug dealers as punishment….I could think of a hundred things..

But no, lets just shoot him because we’re one step above animals anyway, right?

The Las Vegas police, the Highway Patrol, and the FBI are investigating.