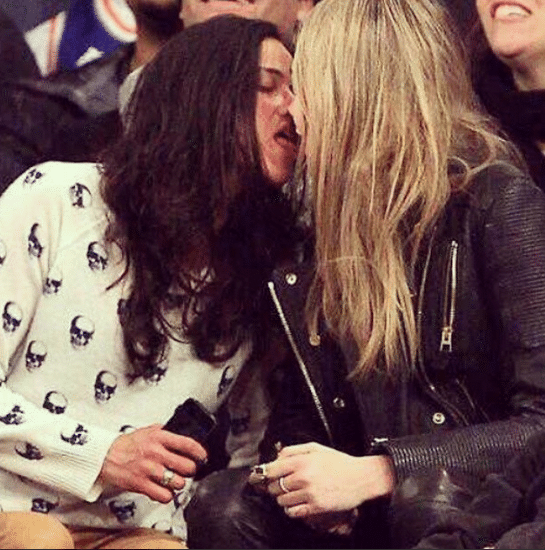 Kids, I just had a look out the window and according to my tele prompter , Michelle Rodriguez‘s stock just jumped 400% whilst Cara Delevingne‘s took a bit of a minor hit of 7 %. Such are it seems are the fortunes of our collective media babes as we set off on another journey of who’s sleeping and abusing who? Yes kids, I think Michelle should have kept her mouth quiet, but then again use the media for what it is- a douche contraption to get the dirt out.

Here is a picture of Cara Delevingne and Michelle Rodriguez drunkenly making out.

The fuss  all began when the UK’s mirror published a scandalized report where no where to be seen actress except in the lap of supermodel, everywhere it girl, Cara Delevingne (kids it took me months to learn how to spell Cara’s surname without using a French dictionary), Michelle Rodriguez decided to drop the out of no where bomb shell that she was seeing Cara.

Then again one supposes Michelle employs an able bodied publicist who advises her when to open and close her mouth in front of slithering reporters.

Why Michelle Rodriguez felt compelled to necessarily divulge the details of her purported personal life is no one but Michelle’s business, but then again announcing your lips are locked on Cara’s coke stained nipples is like announcing: ‘I am interested in being cast in the next Hollywood block buster.’

‘Hollywood are you listening ? I broke this story especially just for you!’

Told our sweet breath of Anglican lover flesh: ‘It’s going really well. She’s so cool. When we started hanging out I just thought she was awesome, and we have the best time together. She’s hard though. You wouldn’t want to mess with her in a fight.’

Kids, I swear that was paraphrased from one of them Mills & Boons romance novels I used to steal from the local library.

And here’s where my eyeballs got soft and soggy: ‘It’s still really fresh and exciting for both of them. They’re really happy and loved-up, and spending as much time together as possible.

‘They’re also forever texting and messaging one another.

‘Michelle has been invited to Poppy’s hen do in Los Angeles which is a big deal, and shows just how cool and accepting all Cara’s friends and family are. No one has batted an eyelid.’

No one has batted an eyelid yet except naturally you.

From there we find out how the purported new love birds met, what they whisper in each other’s ears, and how they plan to write a very long letter together to a very important Hollywood producer to get Michelle a big jumbo acting award winning role that she so desperately covets….

Isn’t it time you hitched a ride on your very own supermodel du jour as well ?