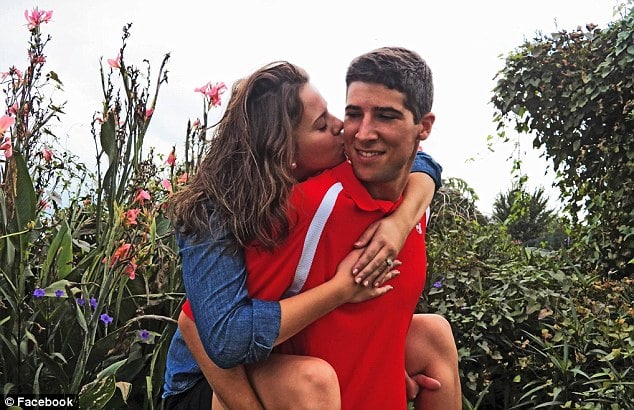 Charles Pittman, 21 a Christianity student has been arrested on suspicion of murdering of his fiancé, Olivia Greenlee, 21 after staging her death to look like a suicide.

The music student would be found dead in her 2001 Toyota Corolla in a parking lot of Tennessee’s Union University last Wednesday morning.

Pursuant to further investigation, Jackson Police Department, Capt. Tyreece Miller told that their bureau had come to arrest Charles Pittman this past Friday, charging the moral guidance student and avid church goer with first degree murder and tampering with evidence.

The couple both students at the Jackson evangelical college who lived separately off campus, were planning to wed in August.

Police have since claimed evidence shows Pittman shot his fiancée in her car on Tuesday night. Preliminary results show the woman died from a single gunshot wound.

Investigators told they found a gun in the woman’s car which belonged to Pittman’s friend which had been taken without the friend’s knowledge.

Cops claim Charles Pittman staged the crime scene to make it look like his young lover, who he proposed to in May 2013, had killed herself.

Pittman’s arraignment is scheduled for Tuesday in Jackson City Court.

What is known of Charles Pittman is that he is a Union University senior majoring in Christian ministries. Union is a private Christian liberal arts university with about 4,200 students.

According to the university’s website, ministry students are taught about Christian ethics, ‘approaches to moral decision-making’, sermon delivery and ‘marriage relationships’ in order to ‘equip bi-vocational pastors, staff, and laity for Christian service.’

News of the murder has unsettled the Christian community, with mourners gathering at Union University’s G.M. Savage Memorial Chapel on Friday.

Told Union President Dr. David Dockery at the assembly: ‘Many of us are baffled, in disbelief, sad and grieving, yet grieving not without hope because of our faith and our confidence in the resurrection of the Lord Jesus Christ,’

‘The Bible tells us to weep with those who weep. And across campus this week, there have been plenty of tears.’

According to her obituary, Olivia Greenlee was a member at First Baptist Church in Dyersburg.

She was a member of Union University Singers, a group leader for the children’s music camps and the Zeta Tau Alpha Sorority, where she participated in many community activities.

She is survived by her parents, Barry and Tina Greenlee, and two sisters.

Since the death, Dr David Dockery released a statement on Saturday calling for ‘understanding.’

‘Understanding that an arrest is not the same thing as a conviction, we now need to let the judicial process run its course. Union University continues to cooperate with authorities.’

Police have not yet said what they believe to be the motive for Greenlee’s alleged shooting.

Since the slaying some have wondered if the girl had become pregnant, was set to leave Pittman or that she may have been having an affair. Nevertheless many have grappled why a moral advocacy student and avid church goer would resort to such a heinous act, in essence forcing further consideration of how Christianity may be failing some in the community.

And then there were this comment on the web that made me wonder as well:

No sure why being a Christian have anything to do with this? This poor girl got involved with a looser.