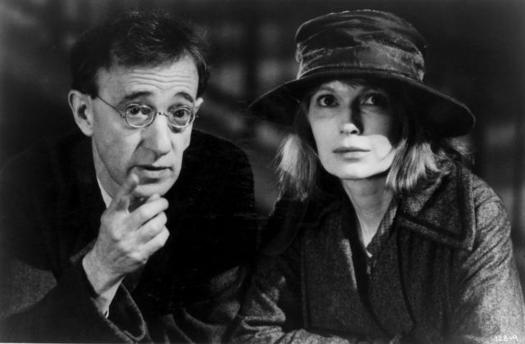 If there was any lingering confusion as to how Woody Allen‘s estranged son, Ronan Farrow (Mia Farrow is his mother) felt about his father, last night’s  impromptu tweet put a death knell to that.

Off the back of a recent Vanity Fair write up which saw allegations of inappropriate sexual behavior at the hands of Woody Allen explored, Ronan Farrow spared no malice as he went on to tweet the following after the director/actor was honored for his life’s body of work at last night’s Golden Globes:

‘Missed the Woody Allen tribute- did they put the part where a woman publicly confirmed he molested her at age 7 before or after Annie Hall?’

The tweet interestingly came pretty much after Diane Keaton was done accepting the tribute award on Woody Allen’s behalf (who interestingly chose not to personally accept the award). The tweet is believed to have referenced Woody Allen’s adopted daughter, Dylan accusing the director of molesting her 20 years ago.

Dylan’s accusations never went to trial and charges were dropped against Allen, but they were heard in the custody hearings between Farrow and Allen. Allen for his part has long denied the allegations.

Interestingly Mia Farrow took to the turntables herself this morning, going on to double up the controversy on her former love interest by tweeting to her more than 370K followers:

‘Is he a pedophile? Read this VanityFair article and make up your own mind. vanityfair.com/online/daily/2…’

Interestingly Vanity Fair’s servers have crashed in the onslaught of revived readership interest.

Whilst most of us can agree that Woody Allen having an affair  with his girlfriend’s adoptive daughter Soon-Yi Previn raises questions of moral culpability (but then again the two were consenting adults) perhaps the greater question is whether we should care that sometimes a great film maker can be just as distorted and purportedly devoid of moral acumen (define morality) as the subject matter of the films he so often specializes in. Which is probably why the films are so good in the first place, cause no one knows blood and gore better than an axe murderer, metaphorically speaking….

That said one wonders if Ronan Farrow was just as tasteless as the man he is accusing of being tasteless and unrelenting by choosing to go to hell banter immediately after Woody Allen came to be celebrated? Sometimes family spats ought to stay indoors (previous investigations found did not find Allen culpable) and out of the public eye, then again these aren’t mere private figures but rather living breathing very public figures whose existences serve to remind America what it loves and abhors about itself.

And then there was this reflection on the web that made me wonder:

Is Woody Allen a pedophile? Would we still be watching his films if he were or would that be too close to the bone…..? And to what extent should we care about an artist’s personal life anyway….?

But perhaps if anyone could best sum up the drama is actress Diane Keaton who used to be involved with Woody Allen and like Mia Farrow starred in many of his films:

‘I think it’s safe to say that Woody Allen is an anomaly.

‘He’s made 74 movies in 48 years. He’s directed them, he’s starred in them, he’s produced them and, of course, he’s written them. He’s written all of them, every one.’

‘They wanted to because Woody’s women can’t be compartmentalised, right? I mean, they struggle, they love, they fall apart, they dominate, they’re funny, they’re flawed. They are, in fact, the hallmark of Woody’s work.

‘But what’s even more remarkable is that absolutely nothing links these unforgettable characters from the fact that they came from the mind of Woody Allen. And there you have it.’