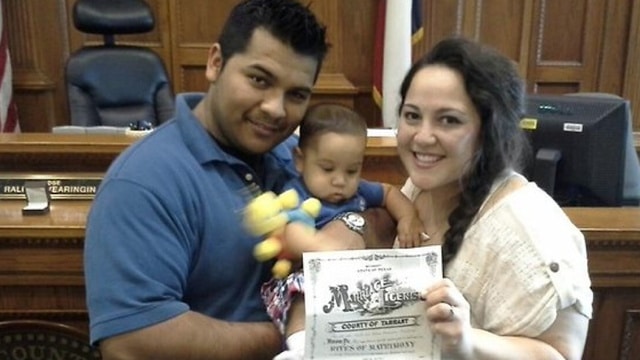 Marlise Munoz, a deceased Texas mother mandated to remain on life support until her unborn fetus is viable is likely to be a stillborn told a lawsuit.

The suit comes after Texas law effectively forced the woman’s body to be used as an incubator because the State refuses to perform abortions.

The issue of whether to keep the woman artificially alive or not first came to the fore a week after this past Thanksgiving when Marlise Munoz unexpectantly passed away after suffering a pulmonary embolism.

At the time the woman was 14 weeks pregnant and rather than let the unborn child die with the mother, Texas mandated that the woman be kept artificially alive until the fetus could live a viable existence outside of the womb.

Yet when the woman’s husband, Erick Munoz, like him, a nurse, told hospital administrators at John Peter Smith Hospital in Fort Worth that in the event she was ever put on life support she would want the plug pulled on her, administrators chose instead to ignore his pleas. Instead they cited a law that mandates requiring pregnant women to be kept on life support until the fetus is viable, typically at 24 to 26 weeks.

Munoz’s husband asked a court last week to force a hospital to take her off a respirator, ventilator and other machines, saying her wishes shouldn’t be disregarded just because she is pregnant. The action is set to go to trial today.

The debate as to whether to turn off the switch off or not although dealing with the right to life of an unborn child inherently has more to do with the state’s ability to intervene in matters that many argue ought to be personal and beyond the reach of the state.

Opines time: Now that the mother has lost her ability to make her choices about the future of the fetus known, who has the most claim to make decisions about its fate? Should nature just take its course? Is it the state’s responsibility to step in?

Since being forced to keep Marlise Munoz artificially alive, lawyers for Erick Munoz are contending that the unborn child has become so deformed that one is unable to determine its gender.

Told lawyers Heather King and Jessica Hall in a statement: “Even at this early stage, the lower extremities are deformed to the extent that the gender cannot be determined,”

The lawyers also said the unborn fetus has fluid buildup inside the skull and possible heart problems.

Continued the statement: “Quite sadly, this information is not surprising due to the fact that the fetus, after being deprived of oxygen for an indeterminate length of time, is gestating within a dead and deteriorating body, as a horrified family looks on in absolute anguish, distress and sadness,” said the statement.

The Tarrant County DA, who represents the hospital, has so far not commented on the matter.

From what has been reported before, the husband and wife discussed a living will, but never had anything drafted on paper or notarized!  Even still the state of Texas would override that legal document made by its citizens.

How ironic that the state of Texas and its leaders all scream and stamp their feet about not wanting any government intervention into the rights of the citizens! Then they turn around and insist on laws that cut the civil rights of its citizens (especially women)!

Additionally they scream about the decadence of the moral fiber of America and how we all need to follow the laws of God. So what do they do, they decide to replace God by taking on the role of God by determining who can die and when. Now they have moved onto a larger role of “God-Like-Beings” by insisting on creating life through death! How interesting that they now want to replace God by creating life through a dead body! What absolute arrogance by mortal men!  An excellent example of “False Prophets!”

This is a direct tyranny by the state over the lives of citizens.  This woman had an advanced directive and her entire family is supporting her despite the pregnancy.  The state has no right to intervene.  Let nature take its course.

Let’s assume this fetus were viable. And then it would be born with a ton of special needs and health problems and likely need care 24/7.

So now you have a single parent who is a recent widower, in extreme mental distress, and you give him a child who is a full-time job in itself.

How much do you want to bet that the same legislators who want the woman to incubate this fetus are against providing specialized care for a child like this, respite care, special education, free health care for multiple surgeries that are likely to be needed, any special equipment like wheelchairs and hospital beds, and so on?

So it is OK to do as we wish with the bodies of the dead now? As long as it means your personal ideology is respected, right?