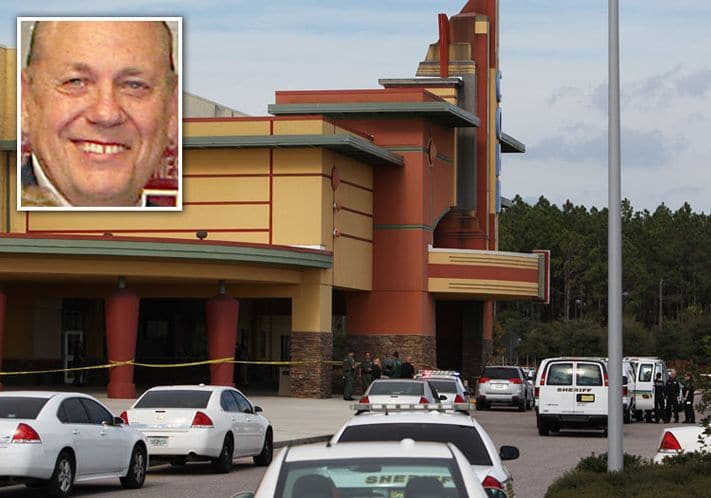 Retired police officer, Curtis Reeves shoots man dead in cinema cause his texting was too loud.

In the maddening altruism that is Florida gun laws, Tampa Bay resident, former police officer, Curtis Reeves has chosen to invoke stand your ground as a defense in the shooting death of a fellow movie goer.

The incident came to pass yesterday morning, when Reeves, 71 and a fellow movie goer, Chad Oulson, got into an altercation whilst the 43 year was ‘noisily’ texting his three year old daughter.

In going on to shoot Oulson after the two men’s back and forth arguments escalated, Reeves has now countered that he felt he was in imminent danger thus necessitating the use of deadly force.

tampabay.com: Reeves told Pasco Sheriff’s deputies Monday that Oulson stood up and struck him in the face with an unknown object when they were arguing inside a Wesley Chapel movie theater during previews. Reeves said he was “in fear of being attacked,” according to an arrest affidavit.

Not buying that line of defense is are local cops because the ‘unknown’ object happened to be a bag of popcorn. Assuming of course throwing popcorn now suddenly constitutes physical abuse.

Reeves wanted Oulson to stop texting. He walked out and complained to theater management. When Reeves returned to the 1:20 p.m. showing of Lone Survivor, “words were exchanged” and Oulson threw a bag of popcorn at Reeves, an arrest affidavit states.

Witnesses say the pair did not throw punches. Then Reeves pulled a gun and shot Oulson, who was pronounced dead at the hospital.

Reeve’s line of defense has once again led to the debating of the merit of Florida’s stand your ground law, how does one actually define ‘reasonable and immediate danger?” The qualifying factor for which the law allows the use of deadly force.

Many factors could come into play, he said.

For one, when Oulson threw popcorn, that was technically assault under state law. Was it reasonable to respond with deadly force simply because of the popcorn? No, Rose said.

However, if Reeves considered the popcorn throwing to be one step in an escalating response from Oulson — and if the 71-year-old man feared that Oulson would come over the movie theater seats and physically attack him next — and if Reeves felt he wouldn’t be able to handle such an attack from a younger man, then jurors might consider deadly force reasonable, the attorney said.

“Here’s the problem: We’re trying to look into the mind of the defendant and posit what the thought was happening,” Rose said.

Then again one has to wonder what the heck to make of a former police cop who (incidentally started the Tampa Police Department’s SWAT team) comes to a movie showing with a loaded gun? How much sympathy can Reeves expect to receive from the courts? It’s not like he was on security watch, on duty, protecting his property, reacting to imminent danger (unless loud text noises now constitute imminent threats).

Then again there is the prevailing view from many that one should be allowed to bear arms at any moment and at any time. Which raises the question do we really want a society where violence is always one argument, misunderstanding, temper tantrum, one hurt ego away?

Isn’t it time Florida did away with an arcane law which legitimizes violence or is the law just a tacit acknowledgement that it’s fine to shoot and kill if one is in the mood and a smidgen threatened without having to make the effort to retreat in the first place?