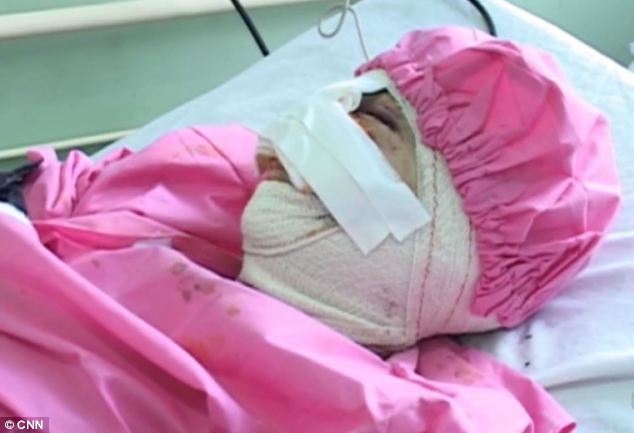 Afghan woman who had her nose cut off halfway through surgery to rebuild her face.

An Afghan woman has had the ignonimity of having her nose and lips cut off by her husband after refusing to sell her jewelry to fund his heroin addiction.

Aljazeera tells the woman who goes by the name of Setara and is a mother of four was beaten and mutilated by her husband at their home in Herat, Afghanistan.

The husband is said to have hit the woman with a stone before using a knife to slice off her nose and lips.

The mutilation came whilst the woman waivered in and out of consciousness.

The woman has since told CNN that her husband had become violent after she had refused to help him fund his drugs habit.

Told the wife: ‘He hit me on the head with a stone,’

‘Then, with the handle of his knife, he cut off my nose and my lips.’

‘He took my mobile phone and the ring I had on my finger, and then he escaped.’

Following the attack, the wife was taken to a local hospital. She is now awaiting treatment in Turkey. 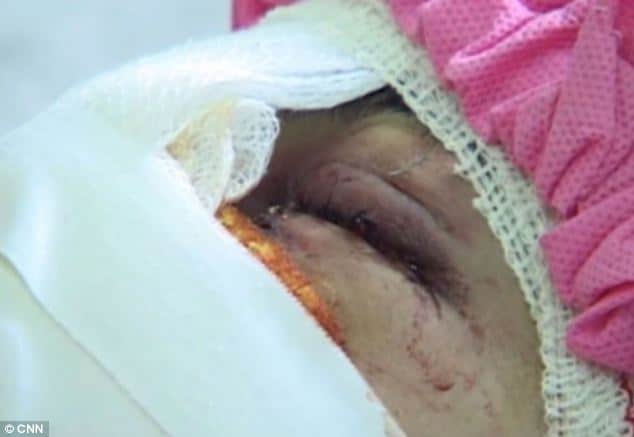 Police have now launched a manhunt and have since arrested two suspects, but at present it is unclear whether the husband had been detained.

When the wife’s mother, Nasima and her son, Mir Agha, arrived at Herat’s central hospital they saw Setara’s face bruised, battered and her arms were covered in white bandages.

‘The first thing they should do is flay him, then stone him to death, so that other people like him get taught a lesson,’ she said.

Told the wife: “As a man, I never thought he would do this to me. I always did good things for him, I never imagined he would try to kill me.”

The incident portends to the blight of women in the region who are often subjected to harassment, violence, and outright discrimination. A recent UN report tells that violence against women in the region has risen 98% in the last year whilst prosecution against perpetrators actually fell 2%.

In the past year, Afghanistan has also seen a staggering number of drug addicts in the country.

Its opium production surged to record levels this year – with the May harvest of opium 49 per cent higher than last year.

Last month alone, the country produced a staggering 6,060 tons of the drug, more than the combined output of the rest of the world, according to a U.N. Office on Drugs and Crime (UNODC) report.

Went on to reflect Orzala Ashraf Nemat, a women’s rights activist who helped pass Afghanistan’s 2009 Elimination of Violence Against Women law: “Her husband’s addiction of course plays a role, but in my view it’s secondary.”

The primary reason, according to Nemat, is impunity.

Went on to tell Nemat: “When a man feels he is above the law, or in the worst case he will bribe his way out of prison, then he allows himself to act however he sees fit.”

Alka Sadat, a local female documentarian has told women actually are more prone to domestic abuse in peaceful areas, where the pressures of the nation’s double digit unemployment rate are more easily felt.