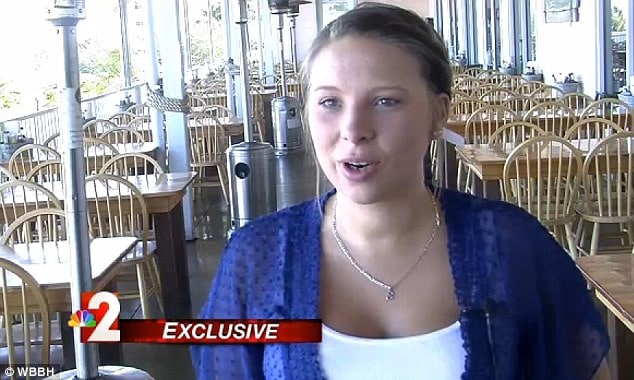 Samantha Knight, a pregnant Florida waitress went on to receive a $1000 reward after going the extra mile to inform a customer that they had left a large wad of cash behind whilst dining at the restaurant, Laishley Crab House in Punta Gorda, Fla. where she worked at.

Yet instead of returning the money to the customer whom would end up being the actual owner of the money, she inadvertently went on to give the money to another customer who agreed that it was in fact his money that Knight had discovered.

It was only after the man left with the small fortune did Samantha Knight realize she had mixed up tables and had given the money to the wrong customer.

The man who actually dropped the money, Chuck Behm, was filmed leaving the restaurant just one minute prior – he soon came back looking for his cash. When told what happened, he was upset and said he’d have let her keep it.

He didn’t blame her for the confusion, instead blaming the guy who initially took money that wasn’t his.

Told Behm: ‘I felt awful. I still feel madder than anything at that guy.’

Chuck Behm then said that if the money was returned he would give it to Samantha Knight.

After contacting local television stations, and even having the young waitress give an on-air interview, the man who took the money realized it wasn’t his and returned it. He went on to tell in an interesting coincidence, that he also had $1,000 cash in $100 bills on him at the restaurant.

After he returned the money, the man, who asked not to be identified, gave the soon-to-be-mother an extra $100 tip ‘for her troubles.’

When contacted by Ms Knight to say the money was returned, Mr Behm stayed true to his word and gave the pregnant waitress the $1000 to keep.

‘I called him this morning and let him know,’ she told the New York Daily News. ‘He said, “It’s yours to keep.”‘