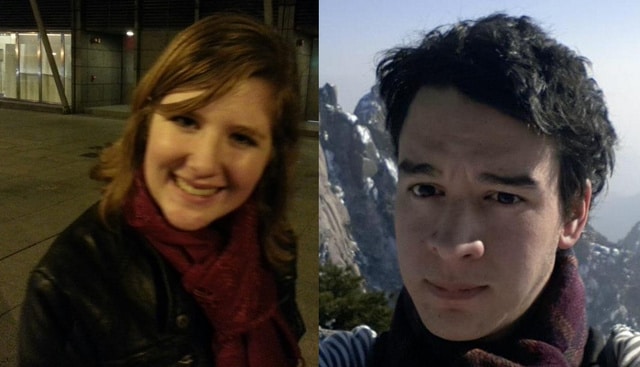 A young New Zealand man, Reese McKee is hoping against hope that a Facebook campaign may put him in touch with a young American woman he met whilst visiting Hong Kong towards the end of last year.

At the time, Reese McKee came across a woman who only gave her name as Katie. At the time she had lost her friends on new year’s ever and was crying by the side of the road.

Told McKee: “I just cheered her up. I sort of have this undeniably bad sense of humour that no one can resist laughing at,”

At the time the pair went on to drink together and find comfort in a foreign city where at that time of year where one is so often forced to consider their existential plight and come to a reckoning with their being.

By 6 am the pair finally found Katie’s friends. At the time the young woman then issued a challenge to Reese that she should track him down.

The clues she left were sparse. She failed to mention her surname, except to say she was from Washington DC and to leave the above photo of herslelf with the smitten Reese McKee.

At the time Reese McKee went on to spend weeks trying to find the woman in question but to no avail.

Went on to tell the forlorn man: “I got the idea to use Facebook in June but the timing wasn’t right. I think this time of year people have hope for the magic (of Christmas). If nothing else, it would just be great to get in touch with her and say ‘thank you’. To say ‘Hi, how are you doing?’.”

Yet that now has all changed as we now once again approach the end of the year and the romantic McKee has once again sent out hopes to the universe that he can find the woman that he believes stirred something deep inside of him.

With a new Facebook campaign in place the young man is hoping that someone may come to recognize the woman in the above picture and reconnect the two.

In the end it could all be wishful thinking, dramatic hoping, romantic aspirations from an idealistic man, perhaps Katie has found a new love or perhaps she too has been patiently waiting for Reese McKee to come to her avail?

Wrote the young man on his social status update:

I was hurt a long time ago. The hopeless romantic in me was locked away when he got hurt because it was too much. For too long, this has effected my relationships, and I’ve failed people.

Somewhere along the line my romantic soul went silent, and this is a step towards putting that right. […]

I hope to find her. And along the way, find myself.

Went on to tell McKee: “The chances are billions to one, but I like those odds.”