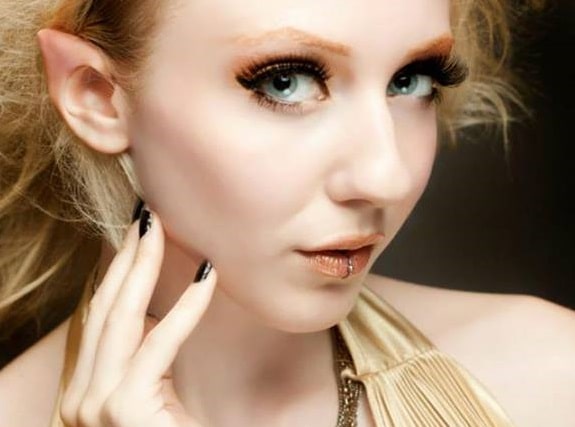 Melynda Moon, 23 has had an operation to make her ears more pointy like an elf after the coming to believe that she was a fairy in a previous life.

Having since gone on to pay $400 for the operation, Moon believes the operation will put her back in touch with her mythical side.

In her operation, the Ontario, Canadian model had the tops of her ears cartilage skinned and pieces cut from the tips to form points, thus affecting the look of the magical figures in Moon’s favorite film, The Lord of the Rings.

Melynda Moon has also had a subdermal implant in her hand which represents the Triforce symbol for the Legend of Zelda.

Told the young woman: ‘Pointed ears are the most adorable thing, and I find the elven attire is so elegant.

‘My inspiration comes from The Lord Of The Rings: the long hair, dresses and the closeness to nature.

‘I have always been very close to nature. When I found out I could have my ears pointed I have never been so sure of something in my entire life.’

‘I am drawn to elves because of their innocence, elegance and free spirit. They are a symbol of love and laughter.’

Melynda Moon went on to describe the treatment as ‘a bit uncomfortable the day after’ and confessed that her ears ‘were really swollen and sore with a slight burning sensation.’

Nevertheless she went on to add: ‘It was completely worth it.

‘I have a handful of people assume I am dressed up because I have put on pointed ears,’ she said.

‘When I tell them they are real, they look pretty confused as if they are waiting for me to say ‘just kidding’ – but I am not.’

Melynda Moon said she had been ‘obsessed with all things mythical’ since childhood.

‘Now I will never go back to being human. I just lack the glitter and wings to fly.’

Goes on to tell the alternative model: Not everyone is going to like you for a lot of things  When you stand out you get more grief. Ignorance is bliss  If people want to judge me because their head is so far up their ass, then that is fine by me.

Shouldn’t you finally invest in your childhood whims too…?