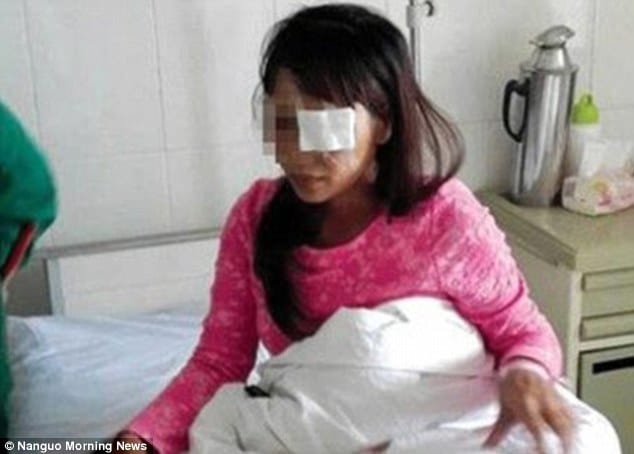 A jealous husband has gouged out his wife’s eyes out after discovering that his estranged wife was carrying on a relationship with a new man and sought to attain a divorce.

The 39 year old woman, surnamed Li, from Yulin city in Guangxi, China, met her new love interest, surnamed Long after having gone on to to escape an abusive marriage.

Reports go on to tell that the woman had been forced to marry her first husband after being intimidated by him. At the time he had been haranguing the woman to assist him in paying off a debt of 150 000 yuan ($25K USD) he owed on the family pig business.

She had told that in the beginning of their love relationship, the man did everything and thought she had at last found her true love after the failure of an earlier marriage she asked.

Nevertheless three months into the new relationship the man began to make mandates of the woman.

From there the woman went on being repeatedly abused and having her legal documents hidden from her. She was also stripped naked on occasion in public.

Nevertheless the woman managed to leave her husband, returning to her home town of Yulin.

It was there that she met a new man after being introduced to him by a friend.

Nevertheless the estranged husband is said to have shown up on December 13 where he went on to beat the woman’s new boyfriend.

Attempting to protect her boyfriend the husband went on to strike the woman repeatedly before gouging her left eye out with his fingers.

Local media outlet, Nanguo Morning News goes on to tell that the husband then called the hospital and to turn himself in.

The woman has since called on women’ rights groups to assist her in her current plight.