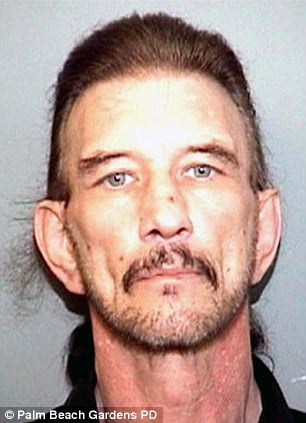 David Lee Edwards, 58 a former powerball winner has gone on to die broke and all alone in hospice after raking in $27 million cash from a lottery jackpot.

At the time, the former convicted felon went on to buy a mansion in the gated community of Ashland, Kentucky, a $1.6million, 6,000-square-foot house in a private tennis and golf community in Palm Beach Gardens, Florida. He spend $600,000 on another home nearby, as well as dozens of expensive cars, as well as a Learjet which set Edwards back another $2 million.

Yet all the money in the world couldn’t stop Edwards from capitulating and descending into a free fall of drug use and fast spending that eventually left him and his wife Shawna broke and incredulously living in a squalid storage unit contaminated with human feces within five years. It was not too long there after that Shawna left David Lee Edwards and remarried.

In the end, Edwards’ first ex-wife and her husband drove him from Florida back home to Ashland. He died in hospice care Saturday at age 58, bereft of all the money he had won and even now owing thousands of dollars to friends.

In his first three months as a millionaire, Edwards went on to spend $3 million. One year after his win, he had spent $12 million, the New Times estimates.

Ironically on the day that he publicly claimed his winnings, Edwards promised to use his money responsibly.

‘You know, a lot of people, they’re out of work. Doesn’t have hardly anything,’ he told reporters.

‘I want this money to last, for me, for my future wife, for my daughter and future generations.’

Shortly after his win, he hired a financial adviser and a lawyer to look after his assets, but that it seems didn’t go down too well.

Instead, Gibbs says, Edwards sold off the stocks and bonds that Gibbs invested on his behalf.

On Tuesday, his daughter, Tiffani Lee Edwards, told that her father had left her with nothing – not even a life insurance policy.

‘There is NO MONEY anywhere!!!!’ she wrote on Facebook.

Tiffani, whom Edwards enrolled in a private college prep academy in South Florida during his short brush with wealth, now works as a clerk at an amusement park in West Virginia.

Before he won the lottery, Edwards was unemployed and living with his then-girlfriend Shawna, who is 19 years his junior.

He had spent a third of his life in prison after he was arrested for armed robbery.

He borrowed money from a friend to pay his water bill. After he got his water turned on, he used the rest to buy a pizza and $7 worth of lotto tickets from Clark’s Pump-N-Shop.

And then there were this comments on the web that made me wonder too:

Sympathy–not one tiny ounce. As an advisor, I understand no amount of advice can trump a person that wants to do exactly what they desire. This man should’ve had the opportunity of generating a beautiful financial legacy for his loved ones. The first thing he should’ve done was create an adequately funded life insurance policy. With his addiction, that at least would assist in the event he squandered his winnings. When you combine an addict and money, you’re only enhancing their means to their vice. It is truly amazing that people win such large sums and yet, end up worse than before the winnings. What’s the purpose of an advisor, if you do not take the advice?

Do these lottery companies provide any counseling for the winners? …most of them (winners) have never had so much money in the first place and behave like children in a sweet shop – unfortunate as it may be.

On one hand it’s tempting to feel sorry for David Lee Edwards, the man ravaged by his own drug addictions, lack of understanding of how to properly use the money, the ease that he too with all the vast riches suddenly in his hands succumbed to the notion of spend, spend, spend and acquire one’s pleasure, status, identity, it is after all what we are so often reminded what to do should anyone of us make it big.

Yet at the same token there are others who have never had the good fortune of David Lee Edwards, who were forced to reckon with persistent discrimination, oppression, lack of funding, sickness, life’s bad shots, things that David Lee Edwards managed to leap frog but still hurl himself back to the abyss of darkness.

Which raises the question, what was it about Edward’s make up, his will, his nature, his idealism that turned him into a flashy existence, and drugs perhaps in a way to never really confront himself in the first place…..he just did the implosion more spectacularly than most of us do all day long….