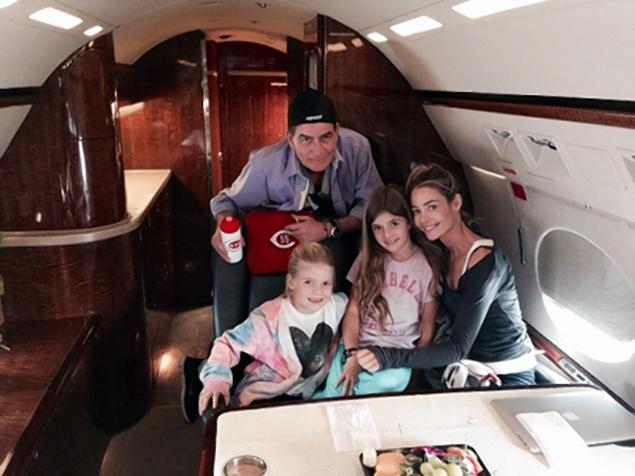 It seems there is little love lost between Charlie Sheen, 48 and his former wife Denise Richards, 42 after she purportedly withdrew her invitation for our collective hero to spend Christmas holidays with her and their two children.

So incensed was CoCo Sheen that the Anger Management star (yes the irony is too palpable, but this is CoCo’s scary life) went on to post a photo of a baseball bat neatly chopped up in 5 pieces that was a wedding gift to the former couple. Interestingly the photo was accompanied with a dagger style knife and a tiny bottle of Tabasco hot sauce. Yes kids the kinky stuff is finally out.

Posting on twitter CoCo went on to add the following:  ‘More like a feeble “K”. The lie is over. I’m done being treated like a relative with a one-way ticket. #DuhNeese.’

Hmm. What do you think kids? Is CoCo pissed off or just grabbing at end of year tabloid attention? Or is he just the coco playing tricks with his mind again?

Of note is the inscription on the wooden bat which goes on to commemorate the couple’s short-lived union with the words: ‘Congratulations Denise & Charlie, June 15, 2002. Have a home run of a life.’

Of course that shit is double irony cause CoCo and Denise managed to strike out overtime.

Despite the failure of their marriage, the pair have managed since their divorce in 2006 to retain some degree of comportment for the sake of their two children.

TMZ reports that the 42-year-old mother-of-three is ‘confused’ about her ex’s outburst because he’s still very much welcome on the holiday as far as she’s concerned.

However, she may be rethinking that stance following this latest incident.

What do you think kids? Should Denise let CoCo come along for some Christmas good cheer? Or will CoCo be forced to resort to his usual holiday cheer?