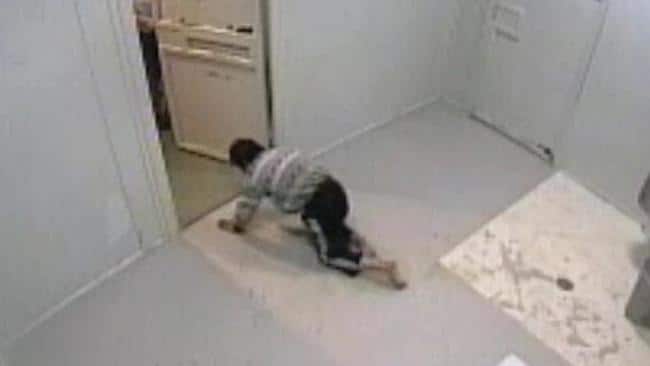 A shocking video out of rural Australia has the world wincing as it goes to show that of one man, Gong Ling Tang experience disturbing treatment at the hands of local police at Australia’s Dandenong facility.

Video footage, dated from May 2010 goes on to show a clearly disorientated Gong Ling Tang, 53 writhing in pain in his cell, and shows him later outside, barely able to stand, and then collapsing in a puddle.

Rather than tend to the man, cops are seen laughing at the man who is escorted outside leaving him alone outside with a bag of his personal property. His pleas for assistance falling on deaf ears the man is left to his own devices.

The following morning he is declared dead at a local hospital.

At the time lawyers argued releasing the video would be used to sensationalize the matter, as well as possibly inflaming relationships between the public and police.

Nevertheless despite the distressing nature of the video, the man’s family wanted the video shown.

Deputy State Coroner Iain West went on to tell: “The family are grateful that the tragic final hours of their husband and father have been revealed,”

Mandarin interpreter Yu Shu Lipski told the inquest police laughed at Mr Tang, who’d soiled himself, ridiculed him, yelled at him, and showed him little respect.

The court heard that as Mr Tang was interviewed an officer “was laughing so much she had tears coming out of her eyes.”

Ms Lipski said Mr Tang said: “I want to go home … I want to go to hospital, I can’t take it any more.

The court has heard there is conflicting evidence about what arrangements had been made for Mr Tang upon his release.

When paramedics arrived at the police station Mr Tang was seen lying barefoot in a puddle of water.

He was admitted to intensive care with hypothermia and liver failure.

He died from a gastrointestinal haemorrhage the next morning.

To date none of the officers involved have been indemnified or required to give evidence at an inquest on the matter.

A force spokesman has since offered a professional standards investigation is pending and police awaited the inquest findings.

At present debate has fostered as to whether the man was treated in the fashion that he was because as some have asserted the police’s nonchalant disregard for ‘alcoholics’ and perhaps more ominously the community’s ongoing tendency to exhibit manners of prejudice to non white attendees, a long running problem within the Australian dialogue. Something that this author can personally attest to growing up in Australia.

The blatant, casual racism in Australia is sometimes breathtaking. You see it through huge swaths of the country and it’s not limited to the “Bogan” class.