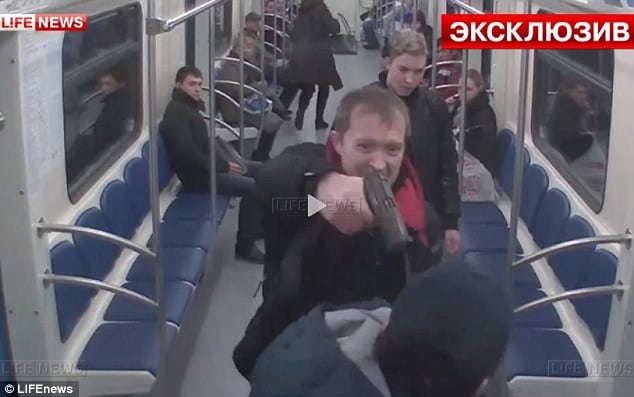 Russian subway passenger, Khashim Latipov has miraculously survived an attempt on his life after being shot at whilst riding the metro.

The graphic incident came to be caught on surveillance camera while passengers rode an underground train in Moscow.

Tells the UK’s dailymail: Two men sit on the underground train in the Russian capital when a fellow passenger travelling in the same carriage attracts their attention.

One of the attackers nods to the other, whispers something, and then both draw guns in the vicious assault which was caught on footage obtained by Life News, a major Russian media outlet.

The afflicted man, Latipov goes on to be shot in the abdomen, kicked at, before then being shot at again, this time at close range in the face. At this moment shocked passengers are seen fleeing to the other side of the train carriage.

From there the two men turn their backs on Latipov but continue to threaten him as he contends with his injuries whilst they flee at Nagornaya station.

In an interview with the Azerbaijani news website gapp.az, Lapitov claimed he had no idea why the attack occurred.

“We just locked eyes…” he said. “I turned away, but he kept looking. And it was such a contemptuous look. He looked like a psycho; like he wanted to kill someone. I was sitting there and I asked him ‘What are you looking at?’ He immediately exchanged a few words with his friend. When I approached them, he stood up, silently took out a gun, and started shooting.”

In trying to reckon with the crime, authorities have posited that the shooting was a racist crime as the dark skinned Latipov, 30, is said to come from the predominantly Muslim state of Dagestan, a region in the Caucasus of southern Russia, the scene of much strife in recent years.

The incident comes as Russia is under scrutiny over alleged racist incidents, with a number of recent attacks, and taunts of foreign players at football matches.

Went on to tell authorities: ‘The IDs of the shooters are not known yet, we are searching for them,’

‘The victim was taken to the hospital, with one bullet in his jaw and serious damage to his face.’

Since the November 17 ordeal Lapitov has undergone surgery and new operations are expected. His assailants to date are still at large.

Oh this isn’t newsworthy, it’s pretty normal for Russians to dislike what is considered the “dirt” in our community like Muslims and such. It’s fucked up but that’s how most Russians think.