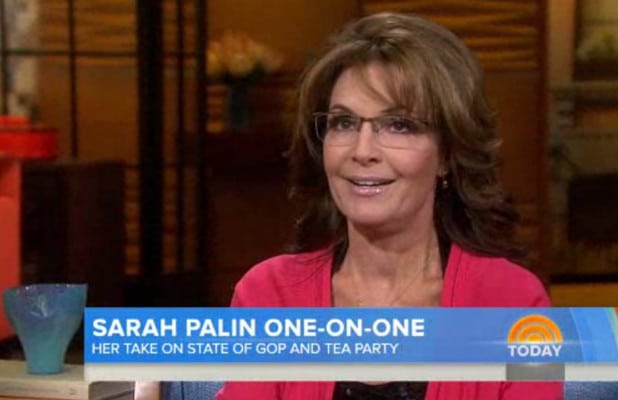 In perhaps in a sign that former Vice President hopeful, Sarah Palin might reconsider her aspirations in the White House, the former Alaskan governor went on to regale Today show host Matt Lauer about how health care really ought to be run in America.

Coming on the Today show to disparage Obamacare, Palin went on to tell how she rejected President Obama’s apology over the slow, beleaguered start to the new health plan.

Told the effervescent (to put it mildly) politician:  ‘What apology?’

‘The broken website is the least of America’s worries. It’s symbolic of broken government.’

Pressed to tell what the tea party would replace Obama’s program with, Palin (at last after going on an unrelated tangent, oh well…) told only that an alternative plan should involve such things as a more free-market approach and tort reform.

‘Most Americans will not be able to keep policy and programs that they had desired,’

“The new policies are unaffordable.’

Which might be  a backhand way of saying socialized medicine is out and free market health care is still here to stay.

From there Palin went on to bemoan the Republican’s latest showing in Congress:

‘They promised that they would do everything in their power to fight against socialized medicine, against Obamacare, but when it came time to stand and defund it, they waved the white flag of surrender and they threw under the bus the good guys who did stand up and fight for us,’

Of note was Sarah Palins sequin new outfit which meshed in perfect color coordination every time she curled her lip at a gob smacked Matt Lauer.

Relevant perhaps not, entertaining as hell, you betcha !

And then there was this comment on the web that caught my sympathy:

She get paid well to lurk under bridges and bash the ACA. There is NO republican plan….the status quo is good for them. The insurance companies were running things then as they are right now. WE NEED SINGLE PAYER…and within strict rules that operate in the best interests of the patient. EXCESSIVE PROFIT needs to leave the equation, I’m not suggesting a doctor won’t make a good living, but an entire industry should not profit off pain and misery. THIS IS NOT ABOUT TORTE…that’s a diversion. Our health is not a commodity to be bought and sold.