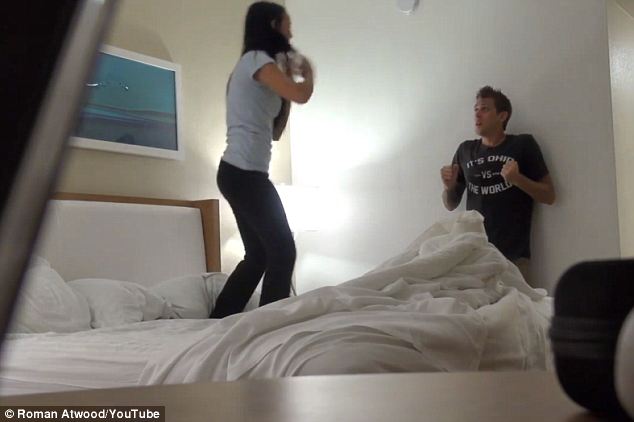 An ‘I cheated on you’ prank has backfired after a boyfriend, Roman Atwood, a professional youtube prankster went on to tell his partner Britney of five years that he had supposedly cheated on her.

The two vacationing in Aruba went on to have the shock of their life when a sobbing Britney went on to also confide to Roman that she too had cheated. Except of course Roman Atwood had never ‘supposedly’ cheated and had only been pranking.

Kids can you raise you hand if you see a dilemma here?

‘I’m in Aruba right now celebrating my five-year anniversary with my girlfriend,’ Atwood tells the camera as he approaches their hotel room. ‘I’m going to prank her tonight by telling her I cheated on her.’

Sobbs Atwood’s girlfriend:  ‘We have a family.’

But it seems if anyone got jolted out of their nonchalance existence it was Roman Atwood himself.

Retorts now Britney: ‘I cheated on you,’

And that’s when the shit really hits the fan.

From there Atwood is seen flipping out, pacing and in stunned disbelief.

Thinking his world has fallen apart, Roman Atwood goes on to receive another shock.

Retorts a smiling Britney: ‘I saw you set up your camera, you idiot!’

Yes kids, Britney was only doling out to Britney what he usually doles out to the world.

From there the couple go on to share a good laugh (you think ?) before Atwood wonders what’s become of his prank.

‘I suck so…I cannot upload that.’

Thankfully, Atwood decided to upload it and the world has gone on to duly enjoy the spectacle.

That said, there may be more shenanigans in store for the serial trickster and his sly girlfriend, who admits at the end of the video: ‘I thought you were going to propose!’

YouTube viewers and Twitter users are now demanding that after Atwood’s cruel prank he should make good by popping the question.

What do you think kids? Is there a wedding proposal on the blocks or is this whole exercise a prank on us?