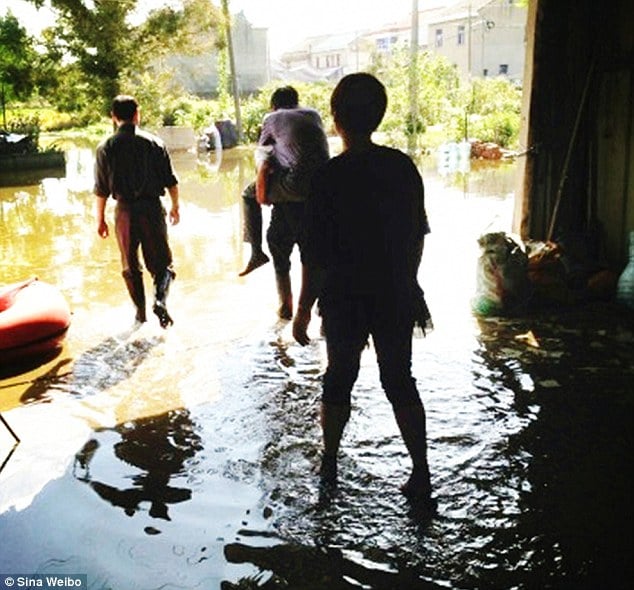 A Chinese official, Wang, has been removed from his post after a picture of him being carried piggy back during a recent typhoon hit the cty of of Yuyao, in the Zhejiang province made the rounds on social media website Sina Weibo.

The release of the photo had gone on to spark outrage as users demanded to know why the official sought a piggy back ride whilst the villagers had gone on to lose life possessions and experience extensive damages. The typhoon, named Typhoon Fitow to date is known to have left ten dead and countless stranded and to have caused the evacuation of hundreds of thousands of people, whilst affecting a total of seven million people.

It later became told the reason Wang was offered a piggy back ride was because the official didn’t want to ruin a pair of new expensive shoes made of cloth he had recently acquired.

Countering that assertion, the Sanqishi Township government, which employed the official, claimed that he had been set to remove his shoes to walk barefoot to a flooding victim’s house when a local instead insisted on picking him up and carrying him through the water.

Confounding matters is why Wang went on to receive a second piggy back ride by the man as he left the house, and why for that matter he did not out of respect for the victims decline.

It is thought the sacking came after higher officials were embarrassed by the perceived faux pas and the suggestion of extended privileges and the implied suggestion that officials were uncaring and behaving in a way without contrition or regard for those less fortunate. A belief that to date has angered many as the continued divide of the haves and the have nots has continued to polarize the nation despite the state message of unrelenting equality.

The recent firing comes after another official was fired last month after a video surfaced of him eating lobster, drinking high-end liquor and criticizing regular Chinese people for complaining too much.

Then there was this contemplation that made me wonder too:

This strange story highlights the extreme lengths the Chinese government will go to to defend its public image. Some might argue its vigilance against anyone who tarnishes that image is more aggressive than its crusade against corruption.