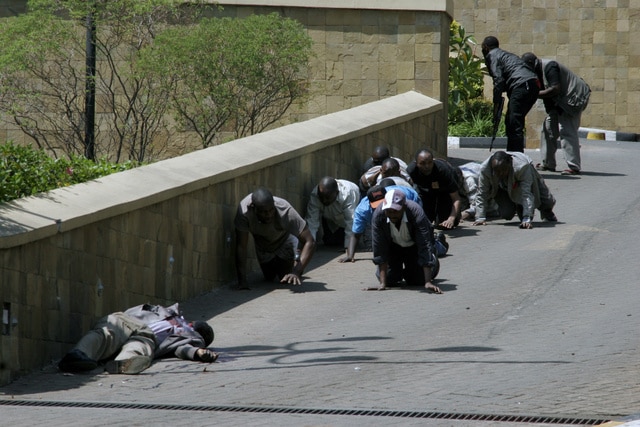 A Kenyan Mall shooting in the capital city of Nairobi this morning has left 22 people dead and more than 50 injured after gunmen purportedly opened fire on non Muslims at an upscale shopping center. At present the gunmen are said to have taken hostages and are amidst a violent gun battle with attending authorities.

Witnesses have told that the gunmen wearing vests and brandishing  AK47’s ordered Muslims to leave before shooting those they believed to be non Muslims. Witnesses went on to tell the men threw grenades into the center whilst issuing their declaration.

Told Mutea Iringo, Kenya’s principal secretary in the ministry of interior: “It is a possibility that it is an attack by terrorists, so we are treating the matter very seriously,”

Abbas Guled, the secretary general of the Kenya Red Cross Society, said at least 20 people had been killed and another 50 were wounded in the attack at about midday.

Benson Kibue, the Nairobi police chief, went on to offer that there are probably no more than 10 gunmen involved.

Off duty Sgt. Major Frank Mugungu said he saw four male attackers and one female, and that he could clearly identify one of the gunmen as a Somali, though he could not identify the rest.

Reiterated Mugungu: “The gunmen told Muslims to stand up and leave. They were safe, and non-Muslims would be targeted.”

The interior ministry has since gone on to ask local media not to televise live images of the now ensuing gun battle with authorities as they believe the gunmen are thought to be watching screens in the mall.

Armed police are said to have arrived half an hour after the attack began where they have since engaged the gunmen in a shootout whilst they hold up to seven shoppers as hostages at the upscale mall.

The attack had initially thought to have been a botched robbery but now officials are marking the incident as a suspected terrorist attack.

“They don’t seem like thugs. This is not a robbery incident,” Yukeh Mannasseh told Reuters. “It seems like an attack. The guards who saw them said they were shooting indiscriminately.”

Told witness Arjen Westra to the BBC: “I could hear the gunfire moving towards the main entrance of the shopping mall, so some people ran out of our cafe in a kind of panic, and quite a number just fell down as flat as possible on the ground.”

The attack which took place at Nairobi’s well to do enclave and shopping mall The Westgate mall, hosts stores like Nike, adidas and Bose, and has Israeli ownership. Security experts have in the past identified the mall as a possible terror target in Nairobi.

The BBC has since gone on to release the following emails received from shoppers taking cover who are at present caught in the crossfire:

11:33: Am hiding in a store, my next person (is) an Indian shot. Severe shooting going on within the premises. I left (a) parcel in my car mid of the road, praying.

12:28: Thugs inside, we don’t know when the police will rescue us, all over TVs and radio, we are warned not to move, am in a dark store, more police coming.

12:38: I don’t even know if I stopped engine of car. Nobody is going out, only police. Praying they ditch thugs out. It is a big shopping mall, now knowing where thugs are is hard. Getting out of here is a mystery. My next person (is) an Indian shot and bleeding.

The UK’s Guardian goes on to note that Kenya has seen a rise in terrorist attacks and threats in recent years, some of which are believed to be in retaliation for a military crackdown on the Somalian militant group al-Shabaab. The group vowed in 2011 to carry out a large-scale attack in Nairobi in retaliation for Kenya sending troops into Somalia to fight them.

As of yet no group has claimed responsibility for today’s attack.

That said aljazeera goes on to note that al-Shabaab, who are thought to be today’s perpetrators, were thought to be behind a shooting which last month left four Kenyan police officers dead in the border county of Garissa after 40 heavily armed men stormed a police post.

In July, al-Shabaab released two Kenyan government officials it had seized in a 2012 cross-border attack, after holding them hostage in Somalia for more than a year.

The Red Cross is now reporting circa around 5 p.m. Kenyan time on its Twitter account that the hostages are being released, and that most hospitals in Nairobi are full.

At present gunfire is ongoing and armed police are at the Westgate mall, which is popular with wealthy Kenyans and expatriates, which may offer a lot as to why the mall was earmarked in the first place…