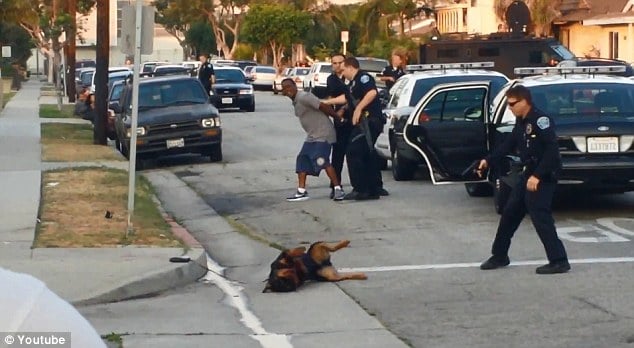 A video posting depicting the grisly shooting death of a Rottweiller named Max at the hands of police officers has gone viral.

At the time the dog’s owner, Leon Rosby had just been arrested by cops on account of the fact that he has been filming them tend to a police scene involving barricaded suspects. Cops had argued he was obstructing them as they sought to tend to a tentative situation at hand.

The incident captured via camera goes on to show Rosby being arrested and without any warning the next image one sees is that of Rosby’s dog suddenly escaping through a window in a parked car belonging to Rosby who he had momentarily placed his dog in as he sought to deal with approaching police officers. Presumably the 130 pound dog had sought to protect Rosby from what it perceived to be imminent danger.

At that moment the sounds of gunfire can next be heard and the video then moves to the debilitating image of the deceased dog on the ground. From there one can hear the dog’s owner screaming.

Since the incident, Rosby has gone on to tell that he only stopped to film the initial police activity because he only wanted to make sure that cops weren’t violating anyone’s civil rights.

At the time, Rosby who lives locally had taken his dog to a local dog run and having returned home sought to video the unfolding police activity after having recently gone on to file six complaints against Hawthorne police department, including a lawsuit alleging officers once broke his rib.

Rosby told that cops had only come to approach him after recognizing him, considering him an antagonizing person with whom to preempt.

Since the video has gone public, public outcry has demanded to know why officers had not simply tased the dog or attempted to pepper spray it than rather just shoot the dog at point blank dead.

“The dog lunged and made aggressive movements towards the officer. Fearing that the attacking rottweiler would imminently bite the officers, one officer fired his duty weapon several times, striking and killing the dog.”

The police statement made no mention of Rosby’s lawsuit. But it did say he was arrested for obstruction of justice because he was playing loud music, walking a large dog and getting too close to officers. Officers also went on to mention others in the onlooking crowd were “at a safe distance” and “compliant” to officers’ requests to keep at considerable bay.

The statement said all of that in its entirety distracted officers from their dangerous work.