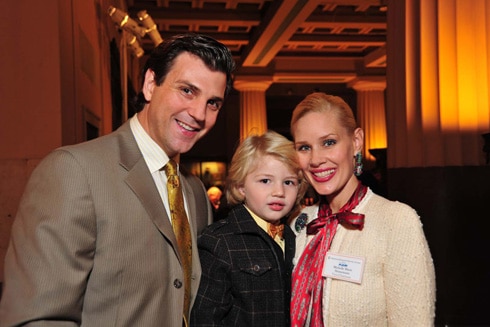 Prominent Upper East side socialites Michelle Heinemann and her investment banker husband Jon have gone on to sue their son’s school after claims that a fund raising auction was rigged so it could charge them $50 000 for a finger painting.

Having since removed their son, Hudson Cornelius Heinemann from the school, Cathedral school of St John the Divine, the parents  have now gone on to sue the school $415 000 in damages. Of that amount, $20 000 is being sued towards the cost of a new school, forfeited class fees for his little sister Hyacinth Cornelia and Hudson’s $60,000-a-year chauffeur, whose job they want to save, naturally.

The Heinemann’s believe the school rigged the auction by having a first-grade teacher, “Ms. Bryant,” drive up the bill to $50,000. Because the Heinemann’s were out of town, and had given instructions to a proxy to be the highest bid, they believed the largest possible damage for a finger painting would fall around $3,000. Except for the fact that Ms. Bryant desperately wanted that finger painting and kept bidding and bidding until the magic number of $50 000 finally popped out.

The finger painting is said to have come as a result of Michelle Heinemann’s efforts (she is said to be a renowned artist) with her son’s kindergarten class to create a piece of art that would be sellable. If only the Heinemann’s could have appreciated how profoundly sellable the work would come to be.

Australia’s sunherald goes on to note that little Hudson Cornelius was already an unhappy kindergartner before this incident, according to a lawsuit filed recently in Manhattan Supreme Court.

When he wasn’t residing with Mummy, Daddy and little sister Hyacinth Cornelia in their Fifth Avenue apartment — or in their waterfront manses in Dutchess County and Kennebunkport, Maine — young master Hudson was getting chauffeured to the Upper West Side private school, where tuition runs $39,000 a year.

The tousled-haired tyke was “underappreciated” there.

“Plaintiff’s son was consistently left out of school exhibits and films . . . and was made to go last at nearly everything,” the lawsuit states.

“On one occasion, plaintiffs’ 5-year-old son was relegated to the role of ‘door-holder’ and ordered to hold the door for all of the other students.”

Officials at the school did not return repeated phone calls yesterday. Can anyone guess why?